Before You Buy That Hermit Crab ....

We took in Panama City Beach last October and came home with a crab for each child.  I'll admit that the lady in the store did give us a bit more information than if we'd bought them at, say, a surf shop.  She told us to get beach sand, make it thick enough to bury them in, and have spare shells.

We brought our new, "easy" pets home.  We did some light research and assembled a home.  Plenty of sand to bury and molt in, stuff to climb on, some new shells.  Here, you see that Tarzan has already moved from his tiny pink shell to a roomy, shiny, white one. 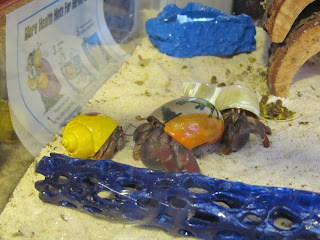 You can see how tiny his old shell was...here it is next to the yellow one inthe above pic... 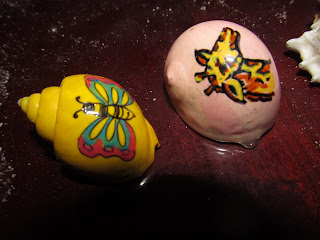 They ate, they drank, they socialized.  But we wondered...they seemed, maybe, lethargic. And we wondered, why didn't they climb?  Hermit crabs are supposed to love to climb.  But, we figured, they're nocturnal, they're probably coming alive at night.

Enter, new character.  We were given an additional crab, by some friends of ours.  We brought him home and decided he was a family crab.  Stephen named him, "Nod."  However, if a child's crab were to perish, Nod would become that child's crab and he/she could rename him.

So we released Nod into our stellar crab-environment and excitedly watched for him to give us his approval.  He liked it at first.  But then he started trying to take Tarzan's shell.

We panicked and started to measure him so we could order him a new shell.  We felt sorry for him as we put him back in isolation.  As I was researching the proper way to measure him and order shells, I started learning important hermit crab info...I got hooked and researched for days.

The product of my research was this...

Hermies MUST have damp substrate.  Ours is 5 parts salt-water-dampened sand with 1 part coconut fiber 7 inches deep in our tank.  Hermit crabs cannot bury themselves in dry sand and will die if they molt above ground.  We now had 2 water dishes, one for salt water and one for fresh.  Hermit crabs cannot crack off their exoskeleton and molt, if they don't have access to salt water.  But they will dehydrate and die without fresh water.  They will also die if they cannot molt.  Another new addition was our thermometer/humidity meter and a tank heater 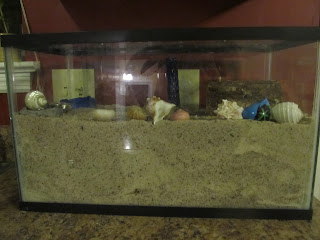 Tarzan stayed in his new saltwater dish for 48!!! hours, people! 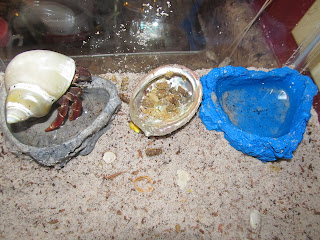 We also bought many new, natural, unpainted shells, sized to fit our crabs, because the clear lacquer on painted shells is toxic to them.  The shells at pet stores are mostly unfit for hermit crabs.  We ordered a batch from an online hermit crab co. and they all immediately changed to new shells.  Here they are in their new shells, but BEFORE they molted... 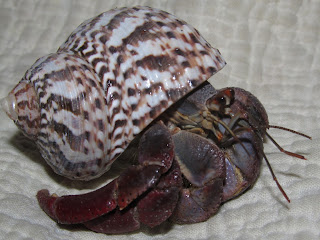 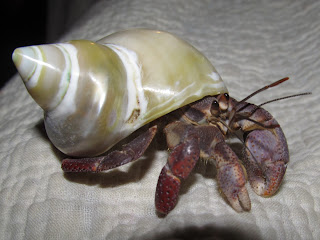 Daffodil (she had a traumatic time in the store and we brought her home with the tips of couple legs missing and half of her small claw ripped off), 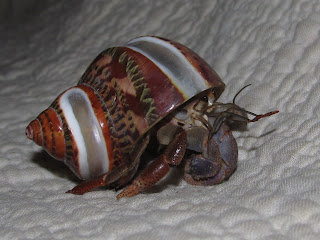 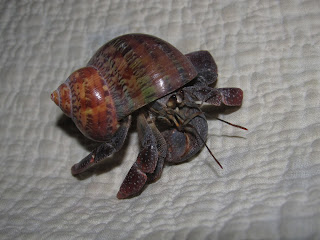 They have each now survived their first molt!  Daffodil has, in fact, survived two molts.  After her first one, we noticed that she now possessed the tips of all her legs and a complete large and small claw!

Daffodil showing off her new-post-molt leg tips and her complete claws! 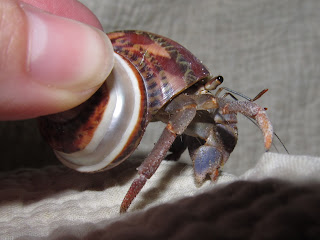 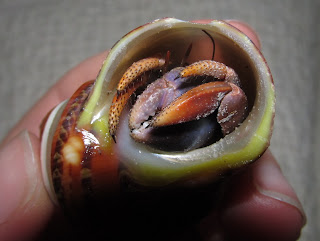 We, now, feel like somewhat seasoned hermit crab owners and wanted to warn unsuspecting beach tourists.  Most people I know who have owned them have had them die fairly quickly and have not had a successful molt.  But hermit crabs ARE easy pets!.... just not as easy as the beach stores would like you to believe!
Posted by mirandagail at 10:18 PM