Out with the Summer...in with the Fall!

This is likely to be a picture dump.  I am quite behind on many posts, so it may also be random :)

Here at this house, we LOVE cooler weather.  If we didn't have gobs of family living around us and even more about 6 hours from here, we would likely move to Alaska.  So for us, the end of summer is worth celebrating!

Towards the end of the summer, Lucy went to art camp where they painted many well-known local landmarks...and things related to them.  Here's her art class and a picture of all the paintings drying on the first day.  Hers is the one with the sunset colors in the sky.  If you want to see more of what she painted, email or text me and I can send you gobs of pictures :) 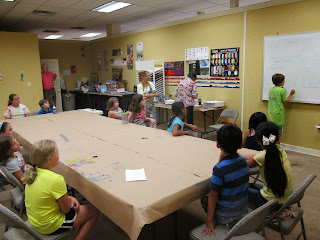 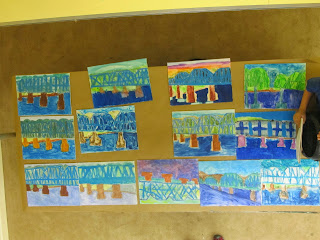 On one of those Thursdays when Mom and Sherry hang out with us, shortly before we started school,  we went to a local arcade-ish place and they had some new sort of bumper cars...VERY fun!!  Iris thinks she wants her birthday to be here ;) 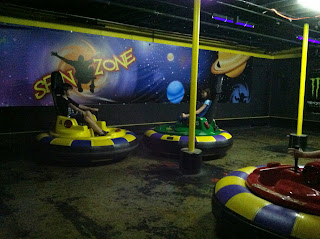 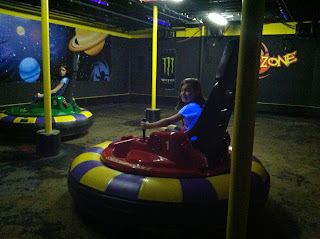 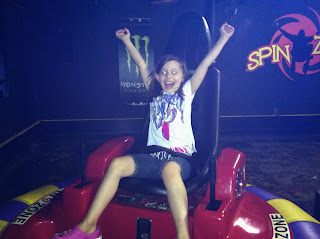 I had been telling Lucy she could have a sleepover with some friends that she doesn't get to see a whole lot, for a while.  And if I was going to keep my word, I figured I needed to do it before school started.  So here is the ONLY(!?) pic I took.  They sequestered themselves in the basement and made lego stop-motion movies the WHOLE time. 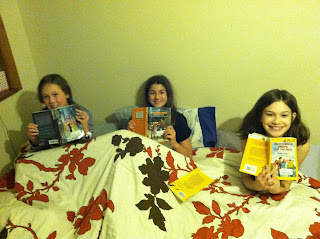 Now, I have a confession to make.  Last school year, we participated in a homeschool co-op.  If you don't know what this is, it's where several homeschool families get together and have classes.  I taught the younger kids' science class.  We studied flying creatures the first semester and aquatic creatures the second semester.  I diligently checked Lucy and Clyde's notebooks and made sure they did their homework.  I occasionally quizzed them to see if they were paying attention.  I really didn't expect much from Iris, since she was just in 1st grade.  So I just figured she would probably remember a thing or two from my science class, but 1st graders don't take notes and I really didn't expect her to do homework or anything, so I never even looked at the science section of her notebook. (guilty sigh)

Fast forward to the weeks before this new school year.  I am emptying the kids' notebooks, book bags and shelves.  I'm filling them with things for the '13-'14 school year.  But imagine my surprise when I find behind Iris's divider labeled "science" tons of notes that she took while I was teaching.

I realize they're kind of random, but I was VERY impressed.  I mean she was 6 and 7 when she took these!  She's trying to listen, watch a slide show, and write at the same time.  All while being surrounded by her best friends ;)  I can't resist a few examples...they're so sweet. 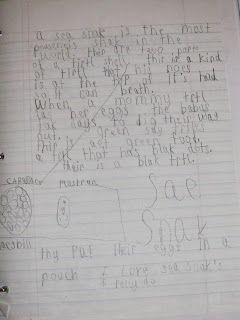 Translation: A sea snake is the most poisonous snake in the world.  There are two parts of a turtle shell.  (She then includes a drawing of the two parts labled 'carapace' and 'plastron')  There is a kind of turtle that his nose is at the top of its head so it can breathe.  When a mommy turtle lays her eggs the babies take days to dig their way out.  Green sea turtles eat green food.  There is a turtle that has black dots.  There is a black turtle.  Hawksbill.  Sea snakes.  They put their eggs in a a pouch.  I love sea snakes.  I really do. (This, again, is my translation, the original spelling is MUCH cuter.) 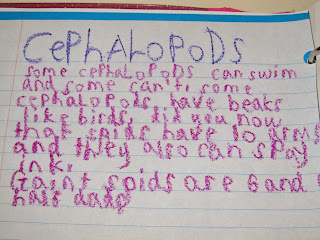 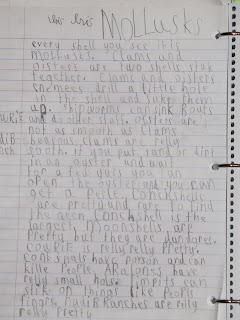 Translation: Mollusks  Every shell you see, it is a mollusk's.  Clams and oysters are two shells stuck together.  Clams' and oysters' enemies drill a little hole in the shell and suck them up.  Shipworms can sink boats and do other stuff.  Oysters are not as smooth as clams because clams are really smooth.  If you put sand or dirt in an oyster and wait for a few years, you can open the oyster and you can get a pearl.  Conch shells are pretty and rare to find.  The Queen Conchshell is the largest.  Moonshells are pretty but they are dangerous.  Cowrie is really, really pretty.  Conesnails have poison and can kill people.  Abalones have really small holes.  Limpets can stick on things, like people's fingers.  Nudibranches are really really pretty.

I know no one could enjoy that QUITE as much as her Mama...but if you've made it this far, hopefully you enjoyed it some ;)

Since this is Lucy's first year of middle school, we decided to do school a little differently this year.  There is a local school, for homeschoolers, ironically enough, that your kids can go to one, or two days a week.  Then they work on studying for tests and homework at home until their next day at the school.

I have a few subjects I was going to have her do with the kids and I at home, so even though her school hadn't started yet, WE started school on Aug 12 (which also happened to be mine and Stephen's 13th anniversary).  Here's a pic of the kids' first day of school... 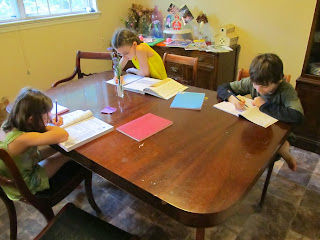 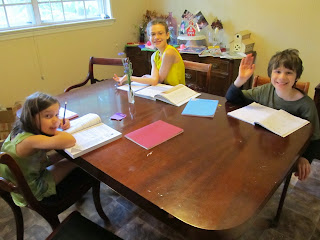 But that didn't seem like a very good "official" first-day-of-school photo.  Sooooo....
The day Lucy started at the school, Clyde, Iris, and I had decided to pack our backpacks and do school at Barnes&Noble.  So I got a much more official looking first-day-of-school pic.  Presenting...my brand-spankin-new 6th grader, 4th grader and 2nd grader! 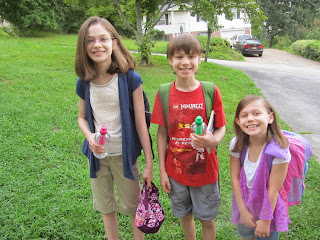 And since Lucy has never done school without me or Stephen before it was kind of a big deal.  So extra pics of her.  One to show how her backpack is going to knock her tiny self over. 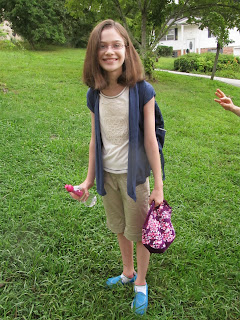 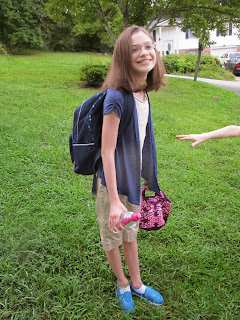 She has really loved it.  She works really hard and spends SOOOO long doing her work from school that I have kind of given up doing extra subjects with her.  But every week, she bounces out of bed eager for her classes, and strolls to class like she's going to a party.  When I pick her up, she's all smiles and chats all the way home about her day.

After officially starting school, we used some coupons to go to a local children's museum.  They were having a special honey harvest celebration.  Lucy made beeswax candles. 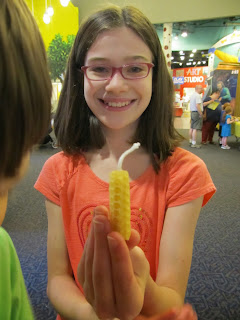 Clyde cranked the machine that separates the honey from the comb using centrifugal force. 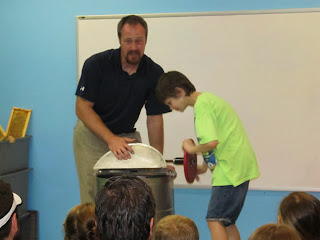 So we've been having fun, and educational times around here.  Hope everyone else is enjoying their new school year and the fall weather as much as we are!
Posted by mirandagail at 9:57 PM