Actually, we've already had many crises...but I liked the title. So we should be pretty accustomed to them, but for some reason...I can't seem to adapt.

And I didn't have a CAR! The moment I realized this, was when I truly panicked. Long story short, Lucy was terrified, as were Mommy and Iris....Clyde, not so much. I called 9-1-1 and waited impatiently for the ambulance. Of course, Stephen and my sister pulled in the same time as the ambulance (!).

Basically her breathing was so bad she COULDN'T wheeze. I am still very upset and she's worried that every allergic reaction is going to be like this. 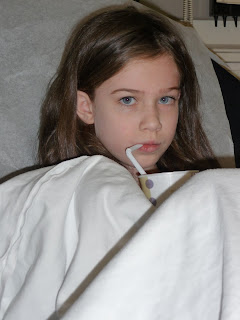 She is fine now, but they aren't sure if it was an allergic reaction or an asthma attack (she's never been diagnosed with asthma). So we've got Dr appointments scheduled, lots of medications to take and we're monitoring her breathing for 2 weeks. It's been 4 days and for some reason I still feel like I'm just calming down.

Crisis #2 We are trying to turn the wilderness behind our house into a backyard. Stephen got a burning permit and was burning lots of wood/leaves today. (Our crisis does not involve fire...except how it got in the way) Since Stephen and I were busy hauling wood to the fire, the kids were moderately unsupervised. They had to stay where we could see them. And the law is, that Stephen cannot leave the fire. (He's pretty paranoid about putting his fires out anyway)

At one point, the fire is burning slowly and I bring the kids to the front yard while I rake. There is a man on his roof blowing leaves. My two girls start coughing like crazy. I start having trouble breathing. I peevishly look up at the man blowing leaves on his roof, thinking this is his fault.

Not 10 seconds later, the coughing escalates, I can hardly breathe and I hear Clyde say,"I shouldn't have done that." I am very ticked at the man on the roof by this point. I try to open the door to let my poor children away from the contaminated air.

The door is locked...I walk around the back with three coughing crying children...my own lungs are driving me nuts. I'm scared to death that this is going to trigger an asthma attack in Clyde or Lucy. Stephen is still burning in the back and yells to see what's wrong. We can't answer except, "Can't breathe!"

Stephen is afraid to leave the fire, but comes to check on us. Clyde starts screaming in pain about his eyes. He says he can't see. (Stephen at this point thinks it's pollen...I'm starting to realize something else is afoot) Clyde is crying and screaming, "I shouldn't have done that, I won't ever do it again".

I put him in the shower to see if I can wash whatever it is out of his eyes. Stephen has gone outside to check on the fire. Lucy comes to me and says, "Momma it's really bad...I'm having trouble breathing...my throat feels really funny." Iris is WAILING and pawing at throat and eyes. I am having serious problems speaking, myself. Clyde says, "It was orange spray!" I call Stephen's cell. He tells me to get everyone out of the house and upwind from it.

Remember, Clyde is in the tub.

I carry one large 6 year old boy whose wearing only a towel while running out of the house and up our hill. Two screaming girls follow. We all instantly feel better and sit down. Aaaahhh! Air!

Stephen runs up to meet us. We start interrogating Clyde. No, it wasn't a spray bottle...no, it wasn't a can or cleaner. He only remembers that it was in the top drawer of a dresser in the garage.

Stephen holds his breath, runs into the garage and comes out with this.... 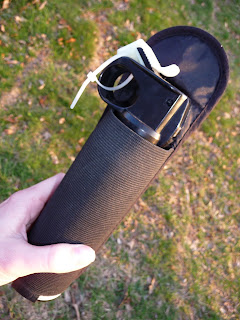 Pepper spray, highly concentrated for bears. Yes, folks, that's what it was.

Clyde had held it in front of his face and sprayed it straight up. I just thank God he missed his face and eyes some how!

So....though it was definitely not in our budget(!) we went out to eat while our house aired out.

Crisis # 3 Clyde choked, but finally threw up his food and is now okay.

We're back home with only a faint smell of pepper spray. We did find this evidence.... 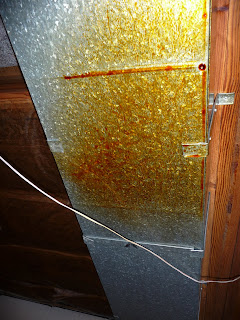 but Stephen washed it off. And now, I'm happy to report, that everyone is our home is breathing quite nicely.