Shortly after Stephen and I got married and moved to Dallas, Texas, I started crying alot.  I was so lonely without my family and friends.  Then I started pleading with my husband to understand why we DESPERATELY needed a dog in our one bedroom apartment.  Growing up, none of his puppies lasted long, they died or ran away.  So his memories of pet-ownership were not positive ones.  But seeing as how his new bride of 2 weeks was moping about and crying all of the time, I think he didn't feel he had much of an option.

We arrived at the Dallas Pet Adoption Agency (I learned the hard way not to call them an animal shelter) and were given a tour of all the dogs by the 12 year old son of the owner.  Stephen tried to steer me to the calm looking small dogs.  The boy tried to assure me that the pitbulls and chowchows were splendid.

But I saw this beautiful boxer/rhodesian ridgeback mix jumping up on his cage door and NOT barking (a plus in an apartment) and asked to go in the run with him.  Stephen and the boy seemed a little surprised, but let me in.  I sat on the concrete ground to watch him and let him smell me, but he just curled his tall, lean body up in my lap...guess he thought he was a lap dog. 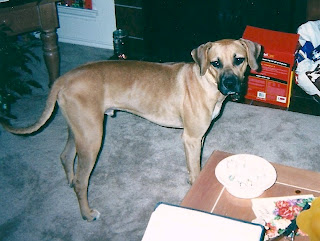 We named him Melchizadek and joked about the tenth of our income he took.  Kizzy was the PERFECT dog for us.  We had our mishaps with him, but he was a loyal, loving companion and we treated him like he was our baby.....till we had a real baby ;) 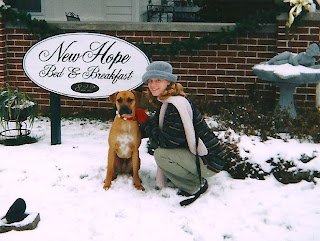 "Kizzy" was Lucy's first word.  He was very patient and tolerant of all of our children.  Around the time Clyde was born he was booted out to become an outside dog.  He loved being an inside or outside dog! 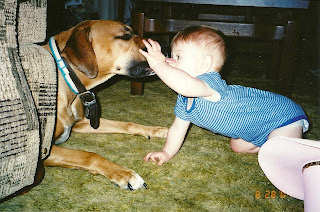 Shortly after this we had to move to Tullahoma and couldn't find a single rental home or apartment that would accept a dog his size.  My Dad had always coveted our precious pooch, so the obvious choice was to send him to live with Grandad and Grandmom :)  He never came back.

They loved him so much, that even once we got a house, we knew we could never ask for him back.  It was all just as well, however, because shortly after that, we found out Lucy had a severe dog allergy and that our house was infested with a permanent pest and we could not keep it.  We got to see and enjoy him at my Dad's everytime we visited.

He would "sing" with my Dad as he played the saxophone.  It was very cool!  The kids would fight over who got to feed him a dog biscuit.  We always took him on our long hikes in the woods.

Just a few weeks ago, Dad and Janet had to put him to sleep due to a tumor growing that they had already tried to have surgically removed.  It was awful.  It was awful on my Dad and Janet who just loved him so much and had to get used to him not being around.  It was awful on Stephen, Sherry and I because we had just adored that dog...he had been around the 11 years Stephen and I have been married.  And it was awful on the kids.  Lucy took it particularly hard.  She hated to think about how sad Grandad was and she just couldn't imagine not having Kizzy around, because he had always been there as far back as she could remember.  I was very surprised she was able to put words to her feelings as she normally struggles with this.

They cried on and off all day.  They just sobbed.  And they just couldn't bear to go to bed.  I let them come lay in my bed, but then they wanted me.  They cried and cried some more.  Suddenly Clyde sat up and prayed, "God thank you, for making this wonderful dog.  He was so special and kind-hearted.  There was no other dog like him and he loved us and we loved him....in Jesus name...Amen."  And then, of course, I cried like a baby. 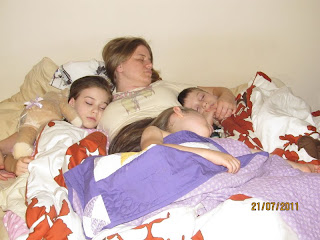 Stephen came in and observed, "Well, they certainly eulogized him well."  Then he picked each one up off me and carried them to their beds.