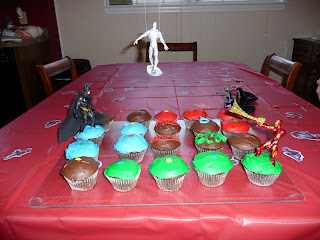 If you ever want to have a superhero party, this is a fun way to do it! Stephen and I literally moved EVERYTHING out of the basement! All toys were gone. We wanted the open space, cause we knew hero battles would soon ensue.

We had giant, inflatable Batman mallets blown up and ready for each guest.

Then of course, Clyde and I made these cupcakes. The action figures doubled as his b-day present from Mom and Dad. I hope you can tell that Silver Surfer is hovering over the cupcakes! A flying superhero only requires tape and thread, but the boys were very impressed. :) I managed to find all masks and round up the boys for a pic around the birthday boy and cake! 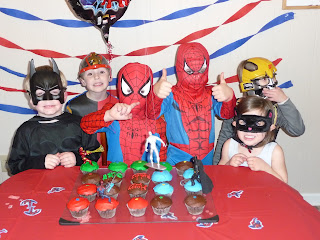 In walks Stephen (aka Super-Villain), with a black shirt and black hood over his head. He has an evil cackle and dangerous threats. He then drops purple balloon-bombs all over the kitchen. The pre-warned boys rushed to pop the "bombs". They then saw the villain try to grab the cupcakes. Poor Stephen was tackled and pelted by 5 hyper boys. Iris and one of the boys were terrified of the Villain and did NOT participate in this event. Actually, Iris was crying. :(

The boys (and Iris) then inhaled the cup cakes and moved downstairs to open presents. But right after the first present was open, Super-Villain returned to steal presents. In my infinite wisdom, I gave each boy a can of silly string! I am so smart, I know! So after they soaked Stephen in silly string they then covered the entire basement floor with it! 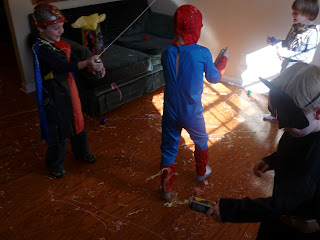 This enormous mess was, of course, followed by more wrestling... 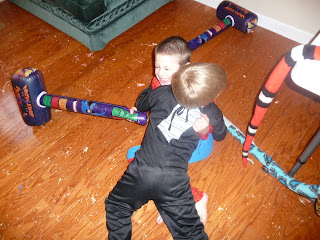 They did this for a VERY long time! They never tired of it. No one got seriously injured! When it appeared that we were pushing our luck with that, we moved the boys upstairs to watch the Fantastic Four cartoon.

When Lucy returned from a weekend getaway at Grandma's, she was very relieved to find all of her belongings intact.

Even though it was a messy, loud, assault-on-the-senses kind of day, I'm thrilled we did it. And Clyde is too!
Posted by mirandagail at 10:44 AM