So...I had these lovely floors that we spent way to long on (see former post). But once we put polyurethane on them, thy looked like streams of sewage were flowing. Even my non-picky better half agreed that we could not leave them that way.

We were definately going to have to start over. The big debate was, do we do that time consuming stencil all over again??? Stephen had a very resounding "no" for his answer! But I couldn't stand the thought that we bought the thing, put all that work into it the first time and our floor would just be solid colored. So..... I present you with our NEW, new floors WITH a coat of polyurethane!! 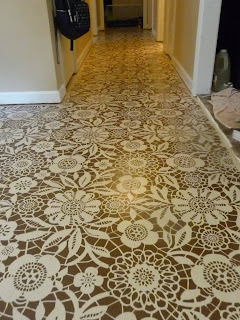 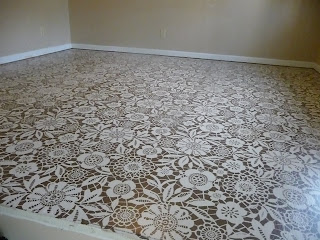 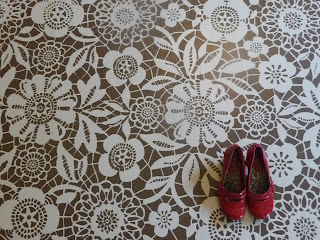 When I was taking these pictures, Iris came and put the shoes on and I just couldn't resist! 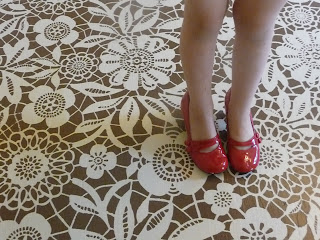 but I did have mercy on Stephen. Since he didn't want to do the stencil again, I felt like it was unfair to make him work on it. So I did ALMOST all of the stenciling by myself. But then he had mercy on me last night and did the last row and half :)

Now I have to go soothe my aching back and hands.

Posted by mirandagail at 6:06 AM