The kids were not ready to celebrate their Daddy's birthday the day we went out for his and Papa's dinner.  They really wanted to do a ACTUAL party on his ACTUAL birthday.

Well, his birthday rolled around and all I was able to muster up was the energy to watch Lucy bake the cake.  I was supposed to help Iris make frosting and frost the cake, and help Clyde make up an equation and write it on the cake.  But all that I actually did was feel my blood-pressure bottom out, and there I was...on the couch.

Stephen said he was fine not having a party, or postponing it.

But while he ran an errand and I was out cold on the couch, my consciousness would kind-of drift in and out.  I vaguely was aware of hearing things...like the kids talking to each other as they decorated the kitchen with streamers.  And I thought I heard Lucy pulling the mixer out and walking Iris through how to make frosting.  Then I heard her telling her how to frost the cake.  Clyde was practicing different equations to find one that equaled 35.  Finally, I pulled myself off the couch, checked Clyde's calculations and watched him "write" the equation on the cake.  Then I watched and occasionally added my two cents as they cooked spaghetti for dinner.

The finished cake, which was done without my help!!! 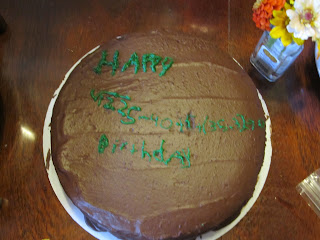 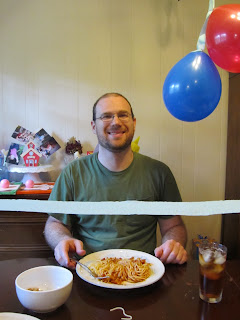 Stephen doing the math...it was correct... 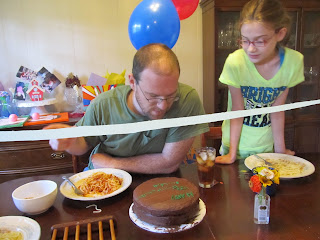 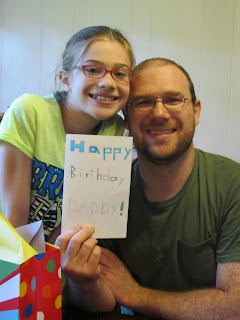 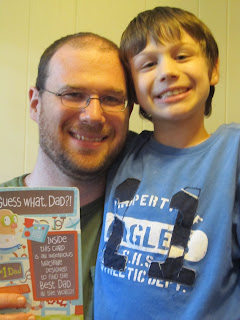 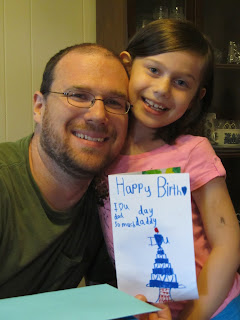 The kids each bought Stephen a present and put them all in one box for him to open.  Lucy got him his "superior writing instruments", Clyde got him chocolate, and Iris got him a jar in which to keep his "pins." 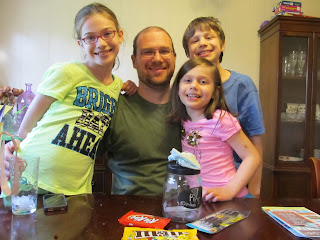 I bought him a knife sharpener and an itunes gift card :)  I forget which child took this picture...but I may have cropped it ;) 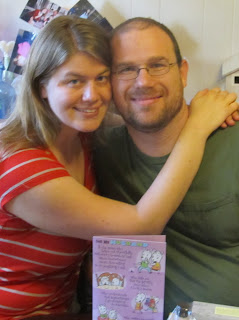