LearningRX, and How We Love Them!!

These 3 minions have always been pretty easy to homeschool.  I'm very blessed to have 3 cooperative and bright children.

However, Clyde has always struggled with reading.  He's always been game whenever I throw something new his way, and has tried his best.  But by the summer after his 3rd grade year, he and I had been through 3 reading curriculum.  We had also spent the last semester doing basically nothing but taking turns reading aloud to each other.  But he still strongly disliked reading, and avoided it whenever he could.  If we gave him a book, he just looked at the pictures.  When he read, it was painful, and slow, and frustrating, though the books were quite basic.  We knew we needed help.  I attempted to line up a couple tutors.  They both fell through.  When the second one called and backed out on me, I completely lost in on the phone!

At the homeschool curriculum fair that summer, I picked up brochures from several learning help and/or tutoring booths.  I went home that night and devoured them deep into the night.

The LearningRX literature made sense to me.  I knew from experience that it wasn't a lack of time or practice, or even a difference in reading methods that was the problem.  There was something in Clyde's brain that was just not clicking and allowing him to learn to read.

Their program was not a tutoring program, but it was supposed to help the students develop better cognitive skills, training their brains to learn.  I just thought...Yes!  This is what he needs...those very basic connections that will finally let his brain process all this reading stuff.

I scheduled a test with them so they could develop a plan for his training.

Some of his cognitive skills tested crazy high!  And some were average.  But his short term memory, executive processing skills and a few others were low.

So this was the plan:  For six months, Clyde would train 1 hour, 3 days a week at the center, one-on-one with a trainer.  And I would train him at home for at least 3 hours a week.

I was really afraid of what the cost would be, but ultimately we felt like it kind of didn't matter.  This was something that could be the difference in whether he could go to college or not, or even read manuals to train himself skills or not.  Ultimately, if this program increased his cognitive skills the way it said it would, we could be spending more money on tutors over the course of years and still not get the results we could get here.  We ended up taking out a small loan, just to make sure we had the money to do the full 6 months.  Then we buckled down and trained away.

His trainer was AWESOME!  They had a lot of fun together!!  And did a LOT of work together!!  He and I trained on weekends, on vacations, during family out-of-town visits....it was crazy! 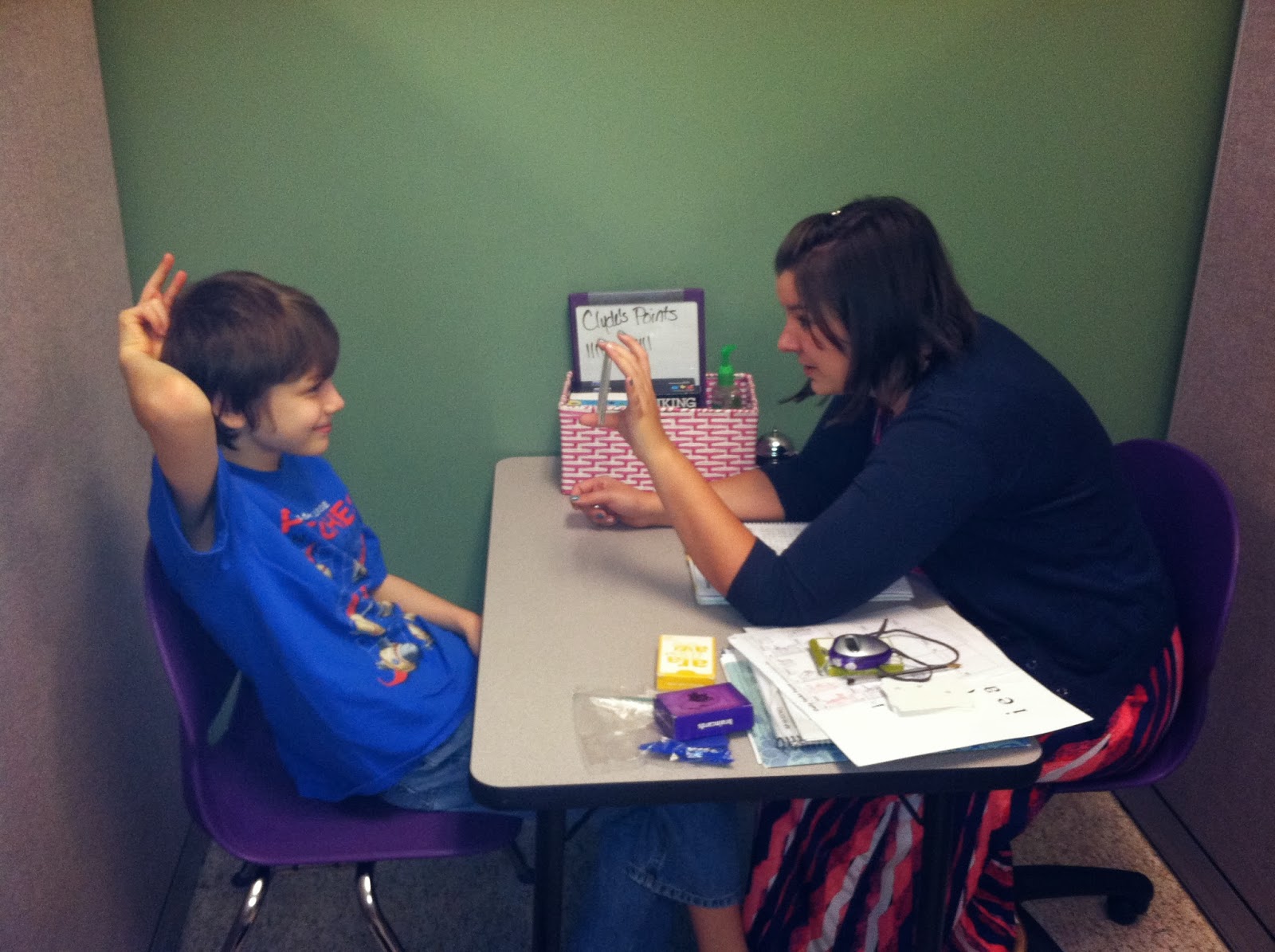 Here they are wearing mustaches, Clyde brought them both one to wear during their training, because they both missed the mustache party :)   (Clyde's is hard to see in this pic, due to it's a white Einstein mustache.) 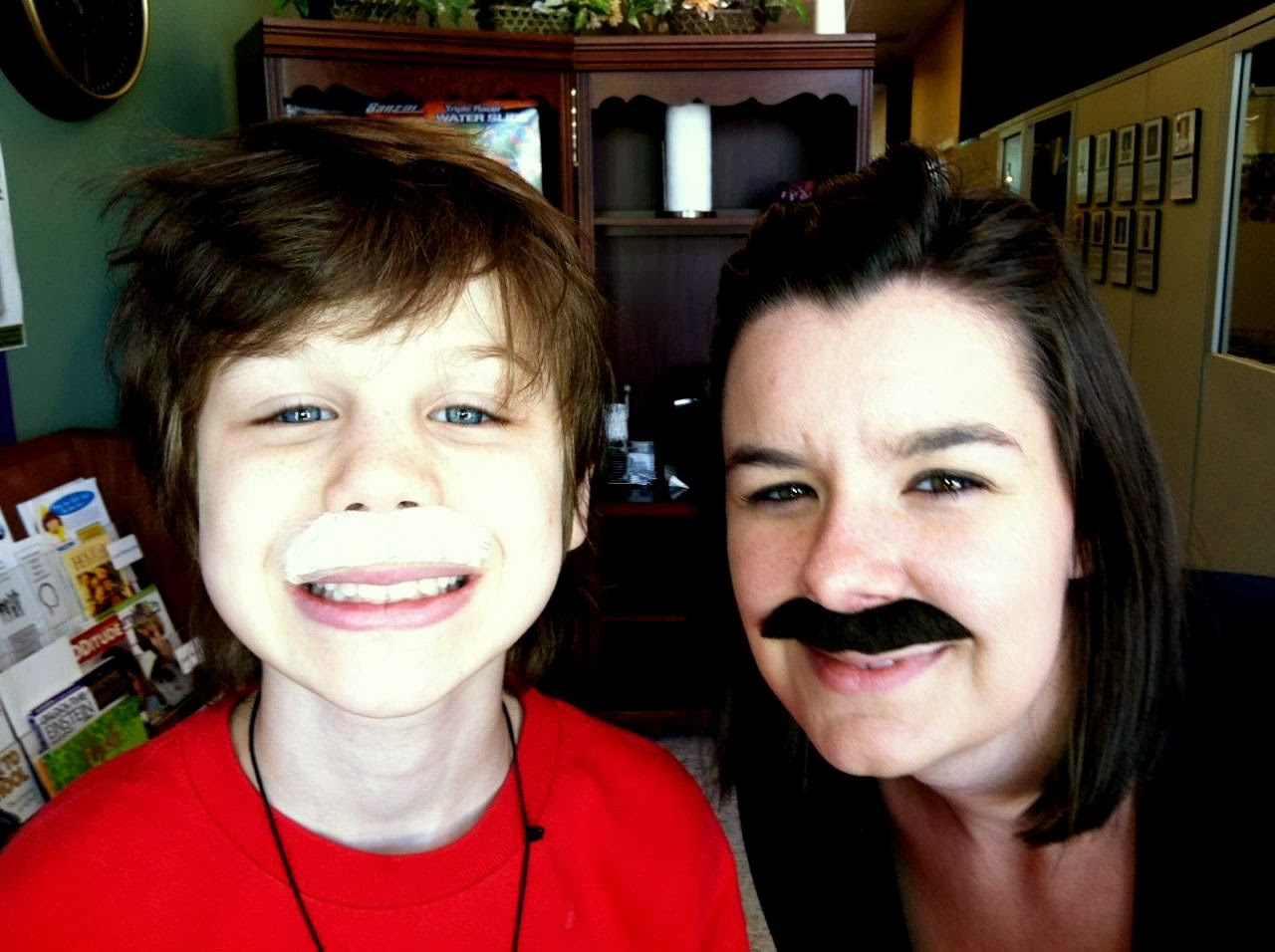 On a particular day when Clyde was clamming up and not being very open, Miss Ashleigh added a letter to his home training.  He was supposed to write about what he liked about training, what he didn't like, and what he hoped it would help him improve. 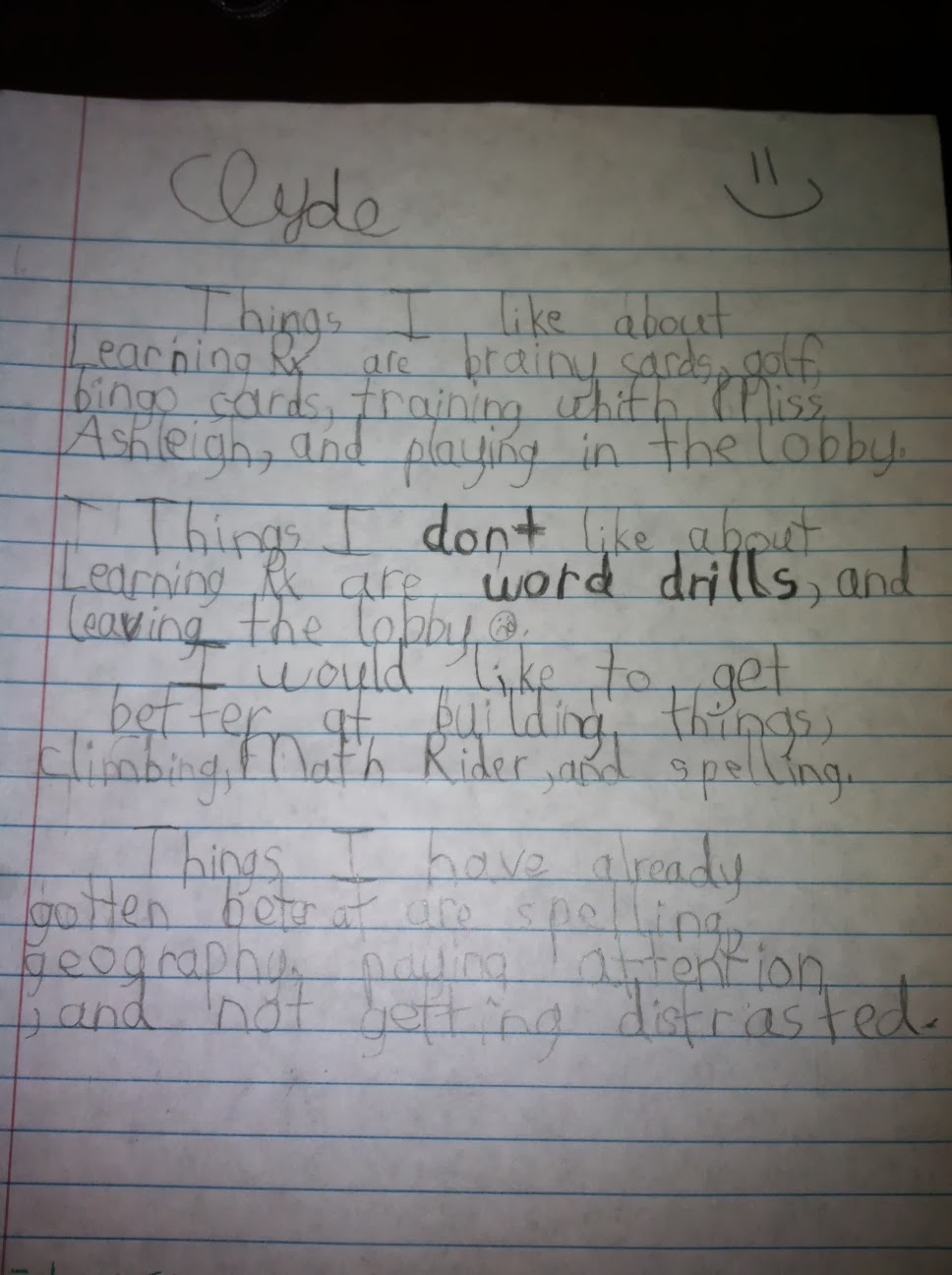 After two and half months, he read his first chapter book VOLUNTARILY!!  The Great Sasquatch Escape.  I am going to send the author of that book, Suzanne Selfors a HUGE THANK-YOU note!!! 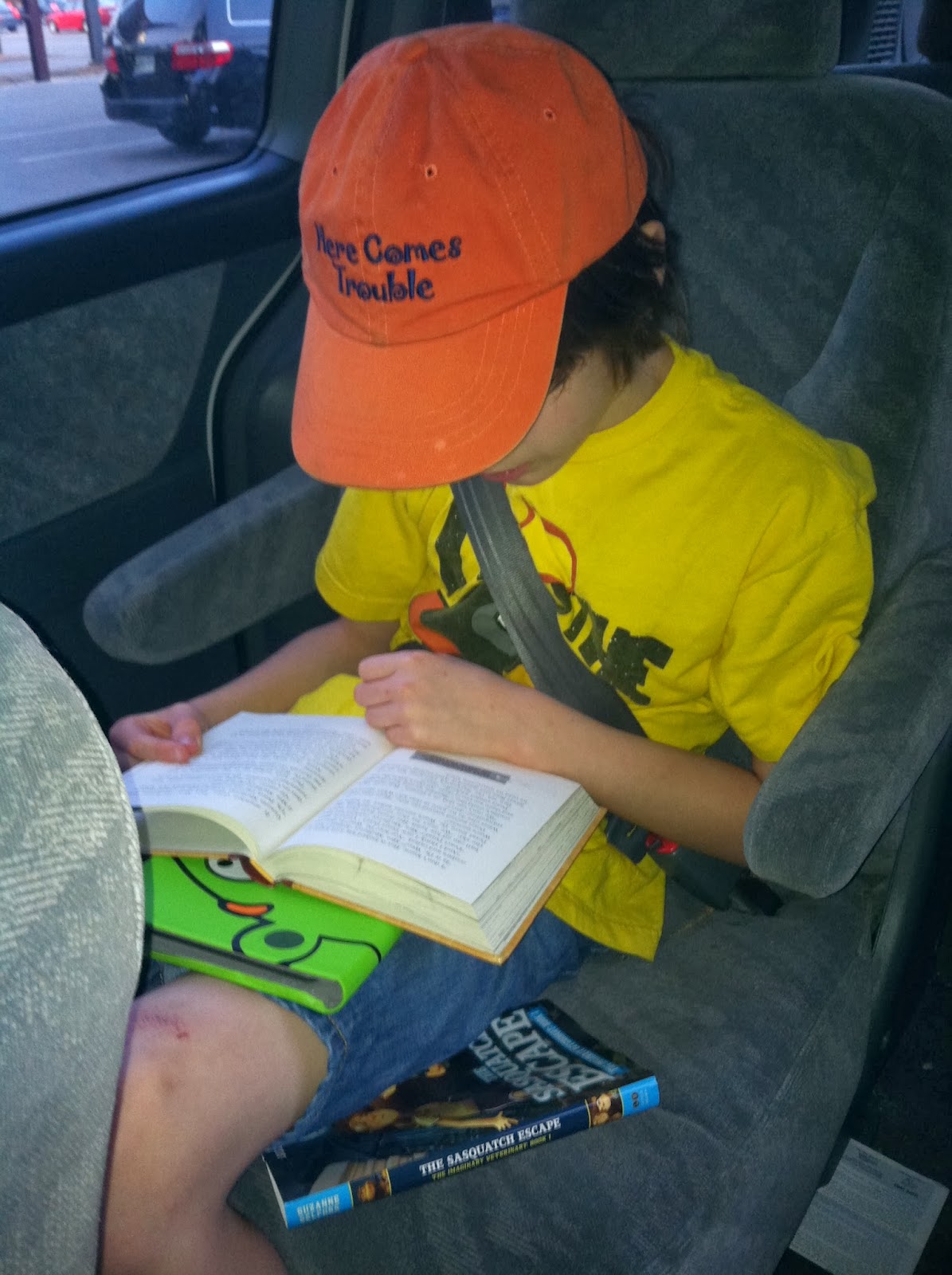 Once students have managed to say the names of the presidents in order forwards AND backwards, each in under 40 seconds, he/she is inducted into the Presidents Club and his/her picture is put on the wall. 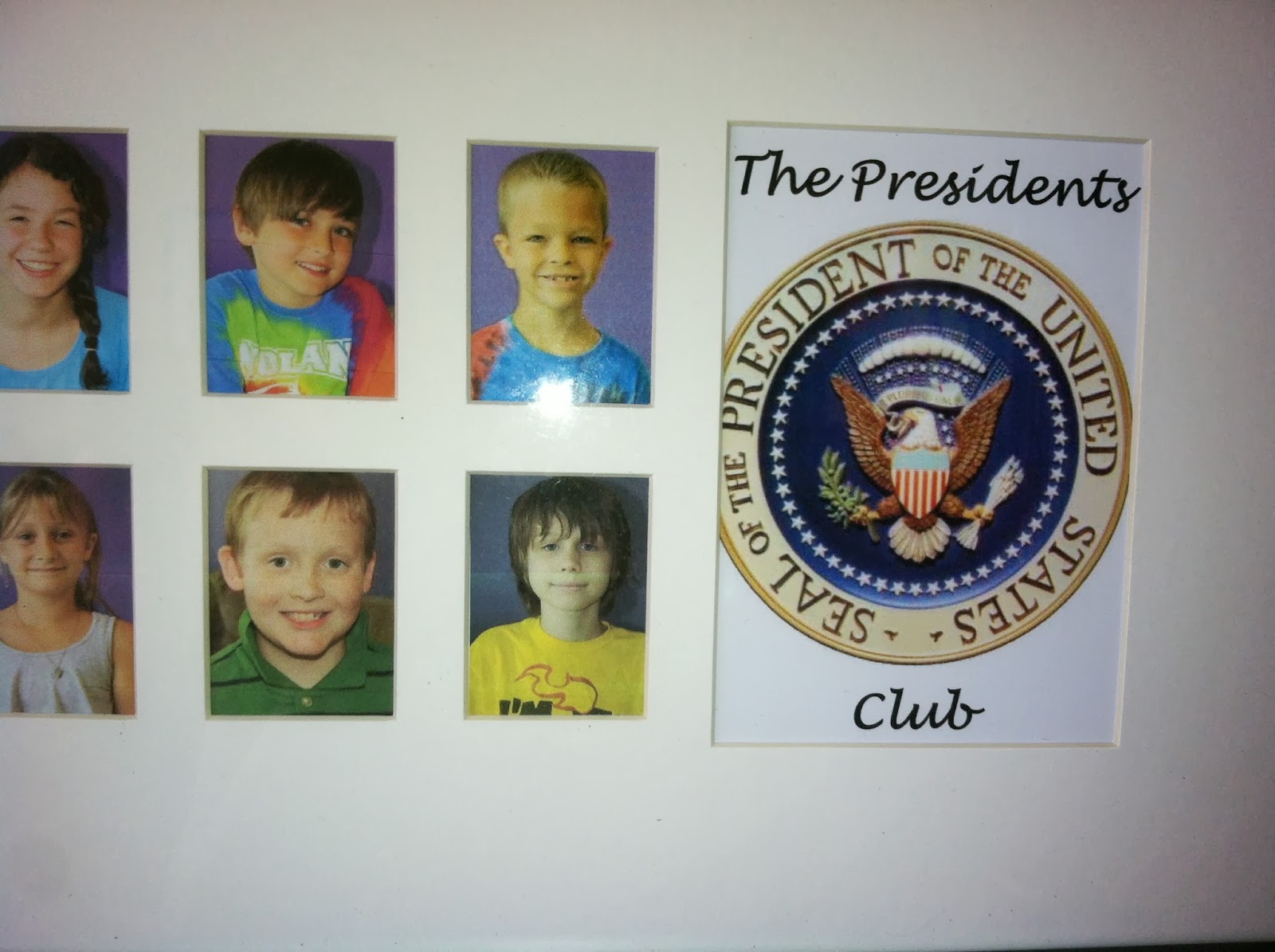 After three months, he was reading the Percy Jackson and the Olympians series!!  We were so amazed!!  These are 300-400 page books!  His book hungry sister was reading them too and they would discuss them ad nauseam.  His nose was suddenly in a book at all times!

Students get points for hard work, home training, improvements, and beating levels of training.  When you get a certain number of points you get 3 Brainy Bucks.  And you can buy prizes with your Brainy Bucks.  The more Brainy Bucks you save, the bigger the prize.  Clyde ended up buying magnetic putty, marbles, and a Whack-a-mole card game. 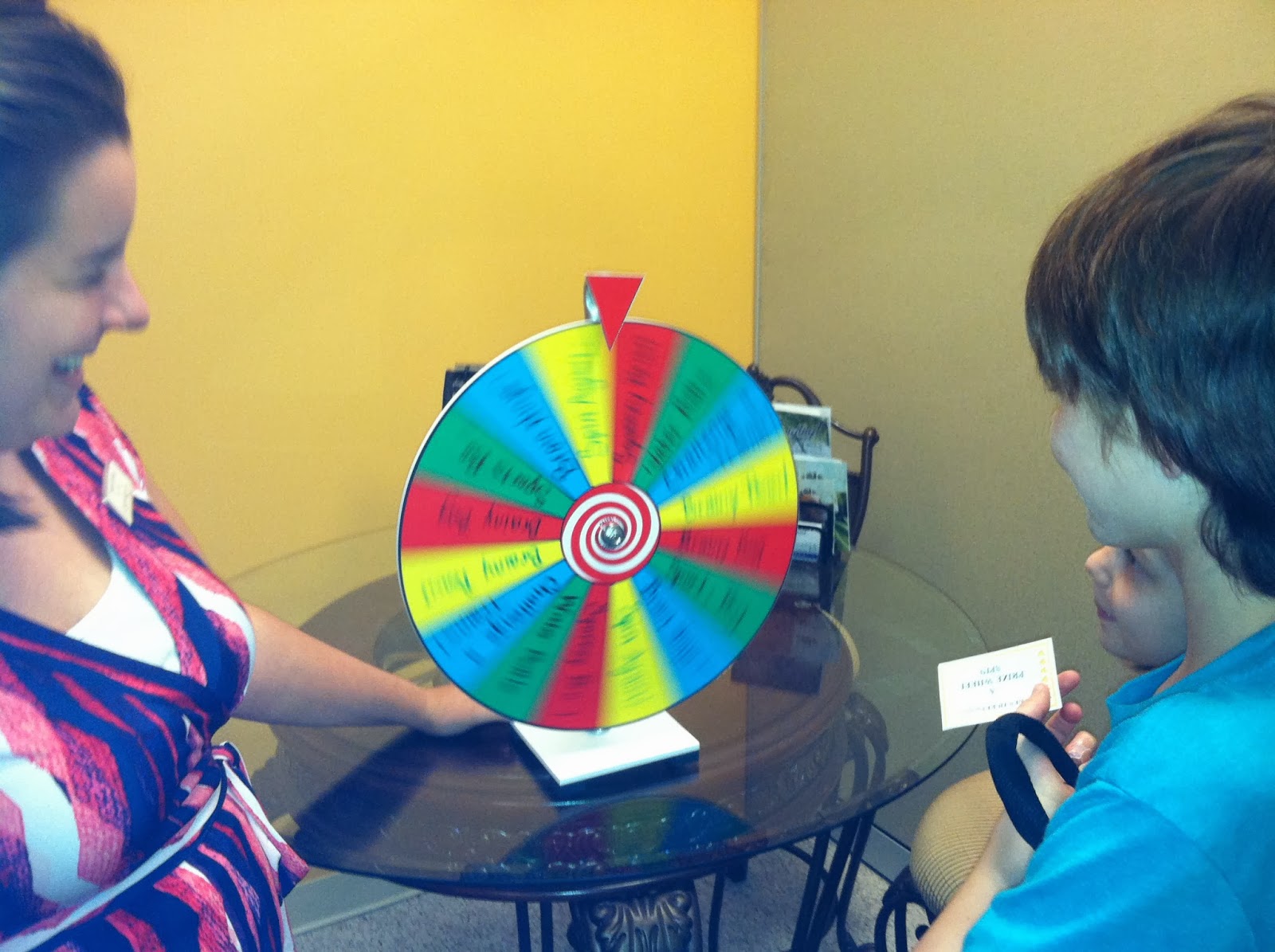 In February, for Presidents Day, the local and national LearningRX were having a competition where you said the presidents in order within 40 seconds while having distractions.  This is Clyde's entry! 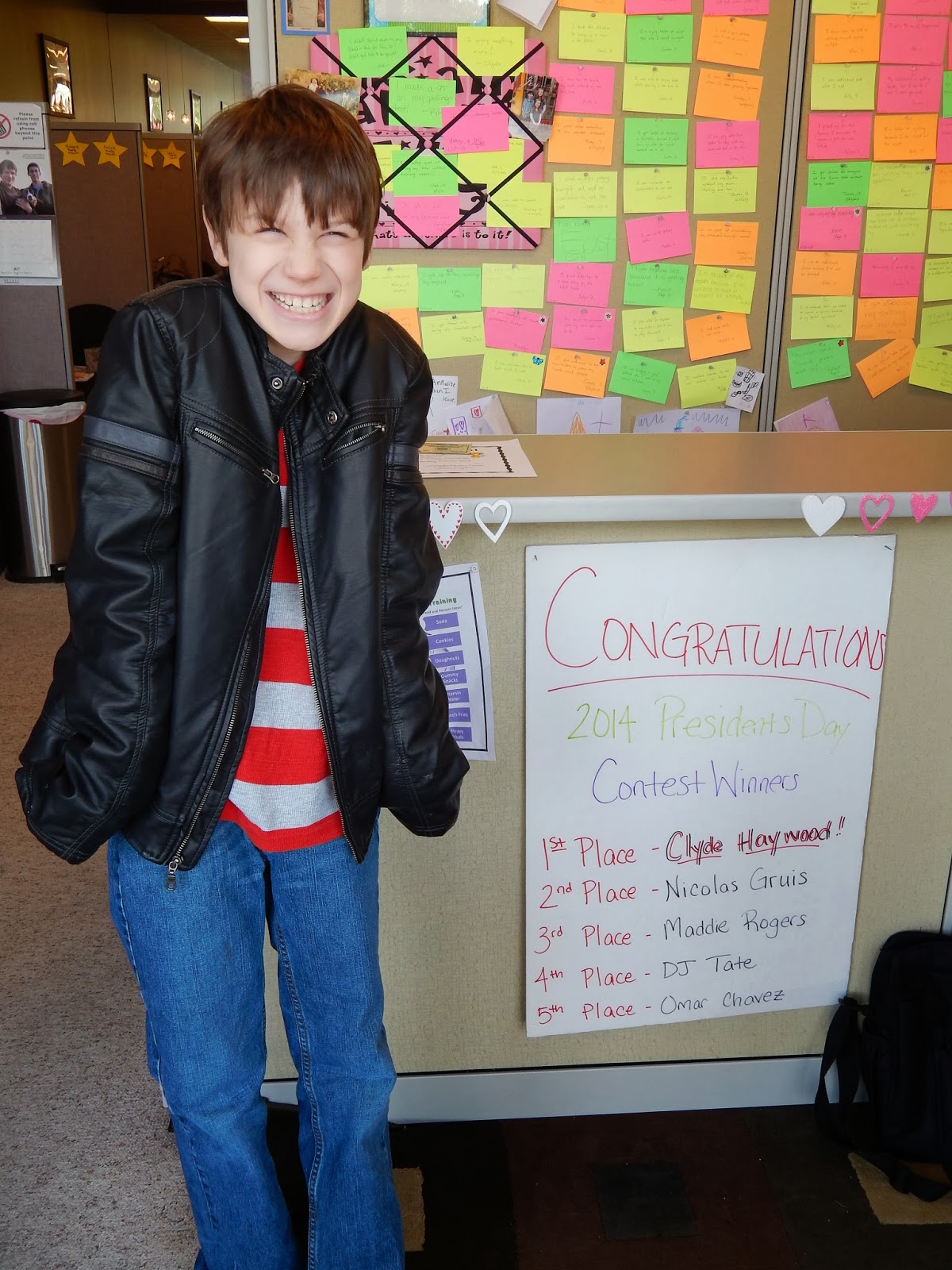 So here we are at the end.  At home has now moved on to a series of books that are each 500-600 pages!  His graduation from the program was today, but two days ago, he took a final test to see how much his cognitive skills had improved. 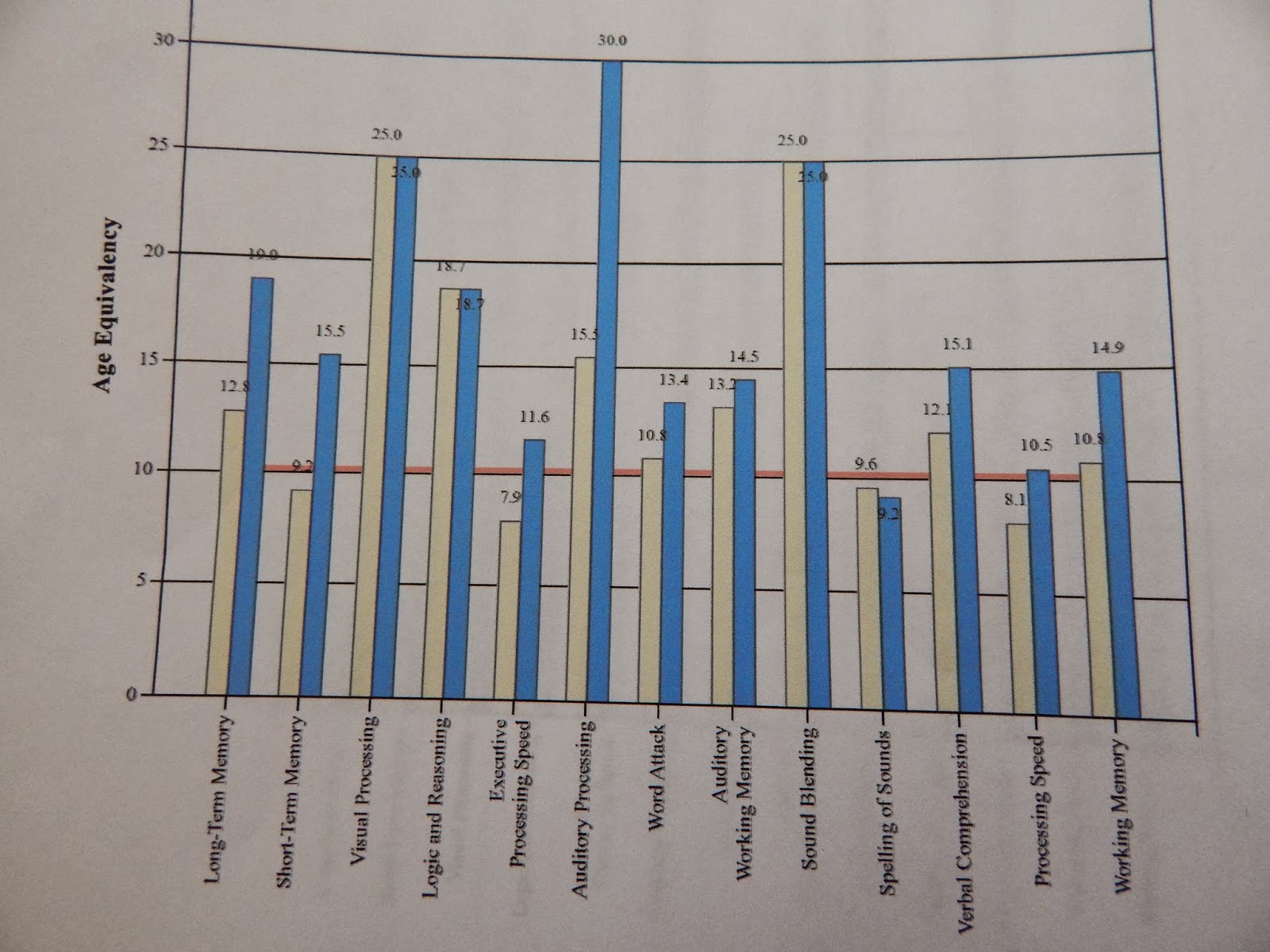 The yellow bars represent the level he was at before training.  Blue represents after.  The pale red line you see across the chart is where he should be at his age (10).  Each line above that goes up 5 years.  At the top of each bar is a small number indicating the age equivalency he is at.  For example, his biggest leap was in Auditory Processing.  Before he started, he had the auditory processing of a 15 year old.  It has now jumped to that of a 30 year old, which is actually where it maxes out...you can't get any higher.  His age equivalency in each cognitive skill now ranges from slightly above his actual age, all the way to maxing out, with the exception of spelling, which I know will improve due to him now actually being a reader!

We are SO HAPPY with these results!  Honestly, though I love to see the progress spelled out like this for me, I didn't need it.  I already knew that he had made amazing progress, and that his brain was suddenly allowing him to read.

And his IQ actually went up 13 points!  That's crazy!

Here's Clyde reading about some of his day-to-day improvements, while his trainer, Miss Ashleigh, and the director, Miss Michelle, listen. 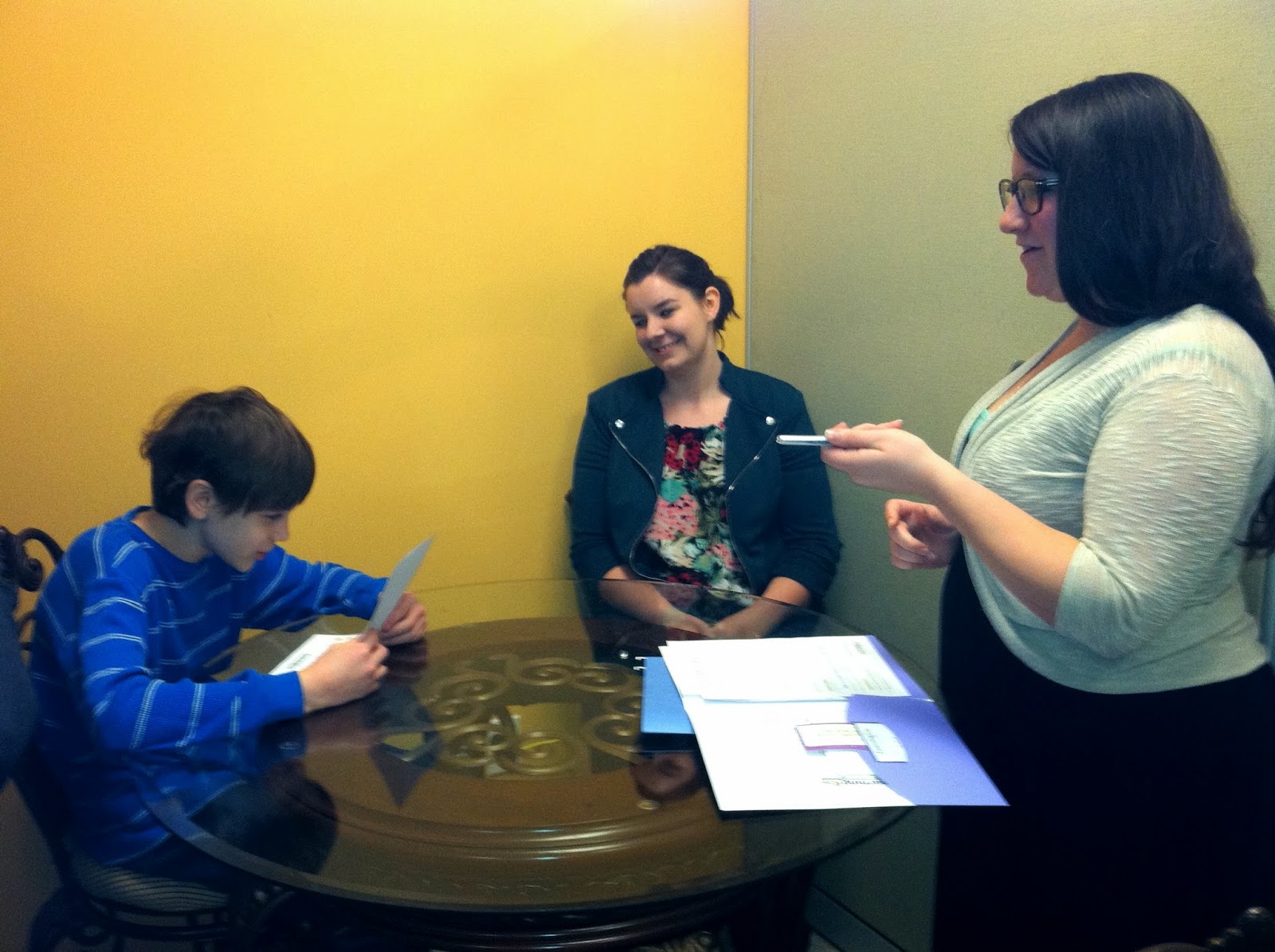 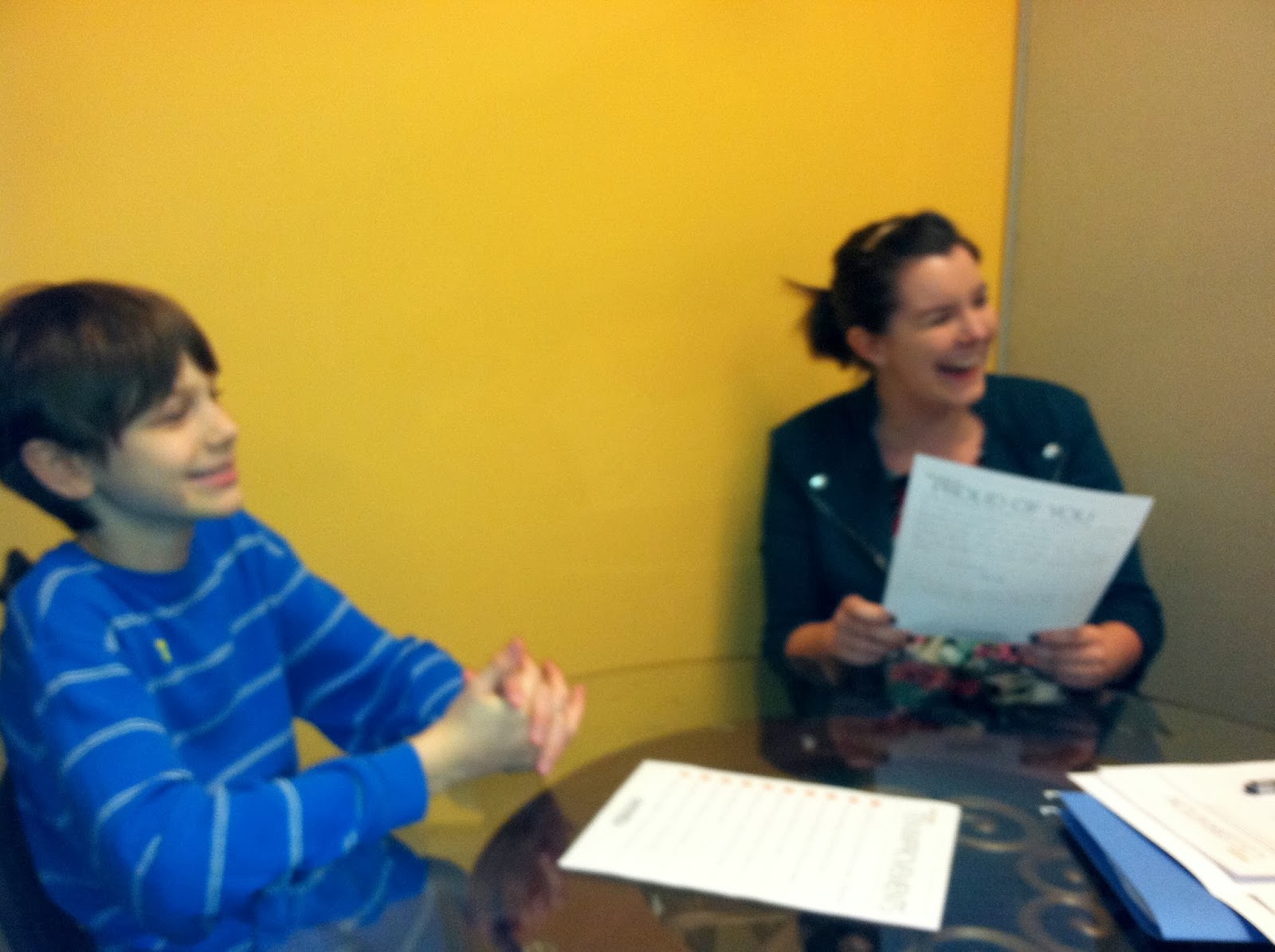 And another picture of him and Miss Ashleigh!  Of course he's making a silly smile ;) 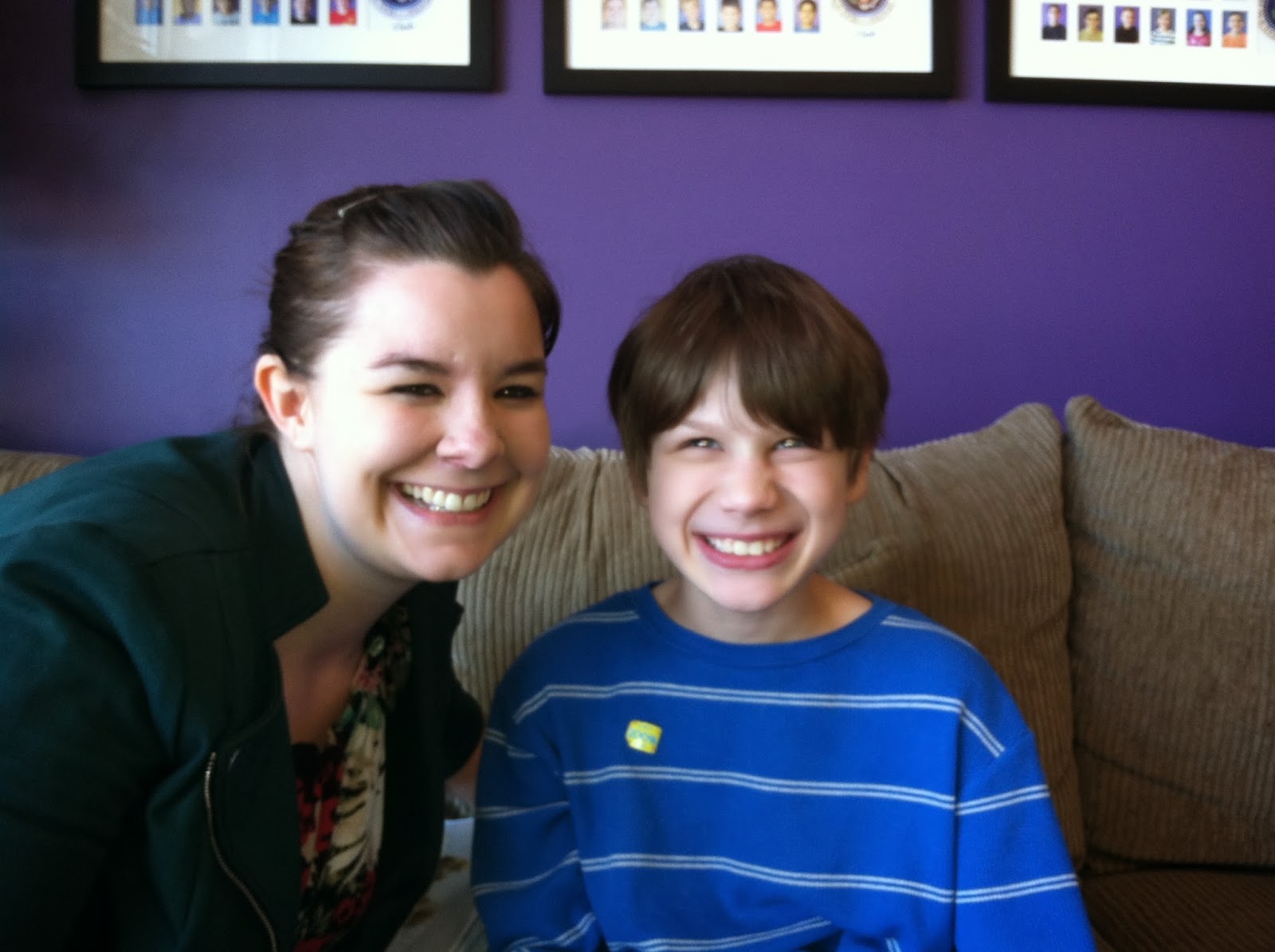 Very happy to have made all the improvements, but a little sad not to be seeing these wonderful people three times a week anymore!

Posted by mirandagail at 8:29 PM