On the way home from Baltimore, I REALLY wanted to stop in Williamsburg.  We would only have a day, and I knew that wouldn't be enough to really see everything.  But I've just been itching to take the kids ever since Lucy started her Colonial girl classes.

Stephen was kind enough to make it happen!!

This was a COMPLETE surprise for the kids, they had no idea where we were going.  Lucy never looked up as we passed fifty Williamsburg signs.

Then when we walked into the hotel lobby, she saw a brochure and we saw the light come on :) 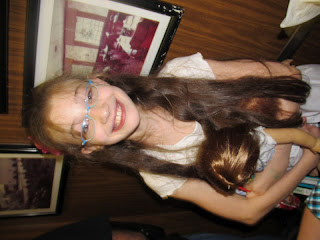 Poor thing thought I had brought her to Williamsburg without her dress, hat and fan bag!!  As If!  And she was STILL excited and thanking us profusely :)  She didn't say anything, but "thank-you" until I told her her dress was in my suitcase.  Then she jumped up and down smiling.

We went through the gift shop while Stephen bought our tickets.  This picture of Iris reminds me of an illustration from the Felicity books! 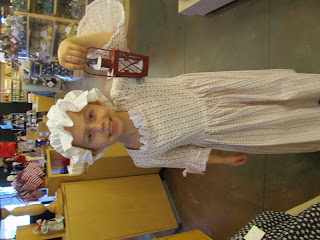 She decided to try on a hat similar to Lucy's. 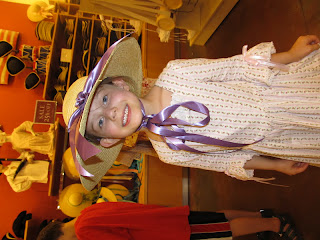 Clyde wearing a patriot hat and carrying a musket.  (I brought him a costume too, but her preferred not to wear it.) 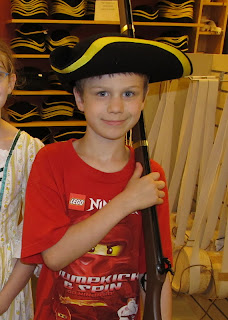 While we waited to go on the Children's tour, they had different activities set up for the kids to do.  Iris is trying to decide which outfits belong to gentry, slave and militia children. 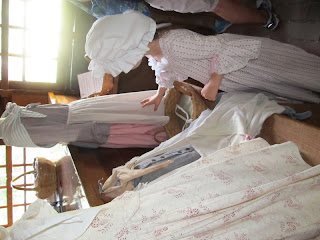 On the tour, our guide taught us how to properly bow.  The men are to spread their arms and "put their best foot forward."  The goal is to show off their calf muscles.  If they don't have hefty calf muscles they can buy artificial ones, so as to be more appealing to the ladies. 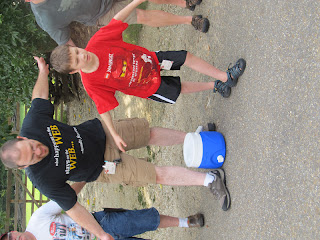 Ladies are to keep their eyes down as they curtsy.  This is so they can inspect gentlemens' calf muscles.  Apparently wealthier gentlemen spend their time dancing and fencing, thus developing their calf muscles, while craftsman develop upper-body strength, but not necessarily hefty calf muscles.  Lucy tried to keep her eyes cast down the whole day....I finally told her to stop so she wouldn't miss seeing the great buildings all around her!! 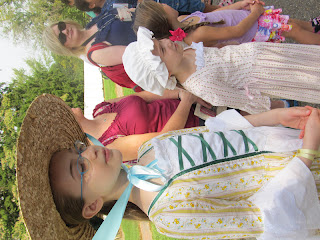 As the tour progressed, they used Clyde and an 11 year old girl to demonstrate the stocks.  Or they WERE GOING to use Clyde.  Apparently Clyde and this young lady had been stealing chickens.  This young lady admitted to knowing right from wrong and apologized for her crime.  When they asked Clyde if he knew right from wrong, he just looked at them quizzically.  So, they determined that he didn't.  Thus, his father had to be punished.  But apparently Stephen lied in court and told them Clyde didn't steal chickens ;)  So, not only was Stephen put in the stocks, but he would have had his ear nailed to it as well! 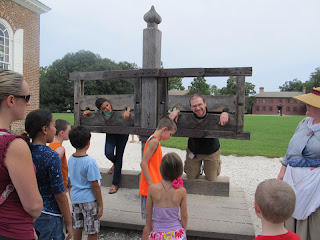 Here we are waiting for the fencing demonstration and play to start. 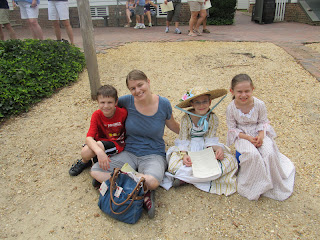 Here are a couple of the actors... 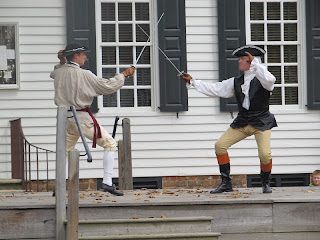 The kids behind the printer's shop :) 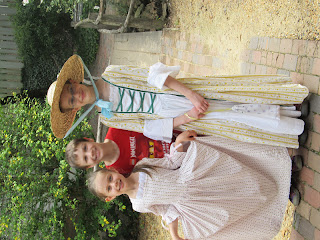 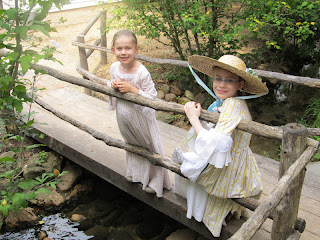