I'm running behind on blog entries, so this one is more than a little late!

For those of you who don't know...my Dearest is a math major.  He loves numbers and patterns and thinks they are among God's most beautiful creations.

Thus, on his first birthday after we married, I started a tradition of putting an equation on his always-chocolate birthday cake that would equal his age.  Well, it is SUPPOSED to equal his age.  But since he married an individual whose poorest subject was always math....sometimes it equals some other number.  I may have gotten it wrong twice....or thrice.

The kids and I have been in great anticipation for Daddy's birthday this year.  Iris has had her eye on a back messager for Daddy for about 3 months.

They all got more into the decorating than normal.  Clyde did a fabulous job on the streamers!!  I was VERY impressed!  Lucy hung the banner on the wall and did a little extra wall art.  Iris tied red yarn around every cabinet handle and decorated the "birthday boy chair".

Iris helped me mix and bake the cake, Clyde did the chocolate icing, and Lucy did the writing of the already-worked-out-by-mommy-and-boy-does-she-hope-it's-right equation on top of the cake.  It was her first time writing on a cake.  It was very tricky, but she did a nice job and was very proud to be allowed to do it. 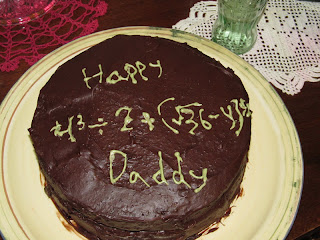 They also helped me make Stephen's birthday dinner...spaghetti.  And then they set the table.  Around this time...Iris started taking pictures. 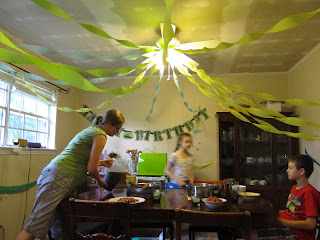 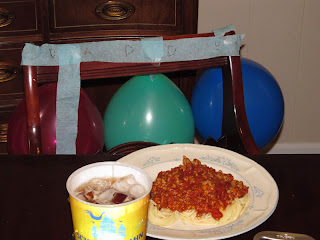 We present Daddy with our efforts and happily eat dinner.  He is thrilled, of course, and very impressed at all the work the kids put into everything this year! 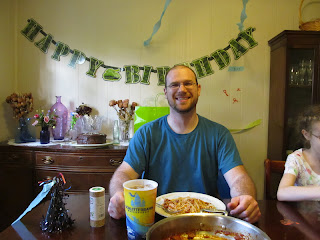 Here, Clyde set the timer on the camera and took a group picture! 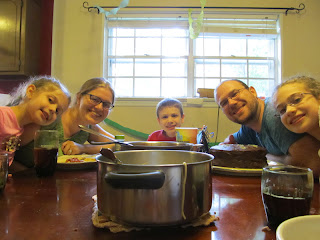 After dinner we all watch breathlessly as Daddy checks Mommy's math.  Yay!  She was successful!! 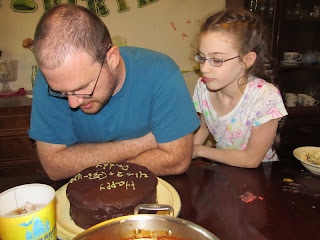 The kids help him light candles before we sing :) 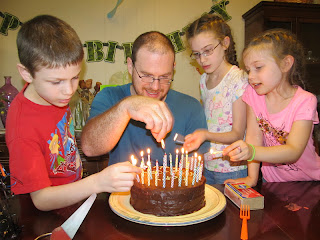 Then he opens cards... 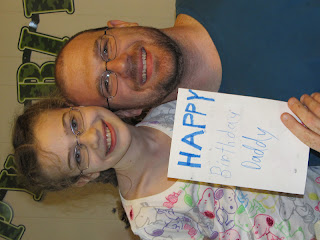 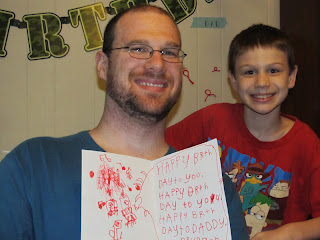 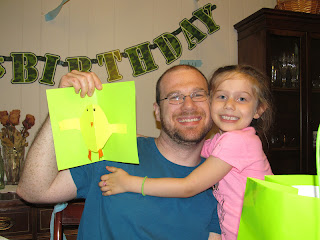 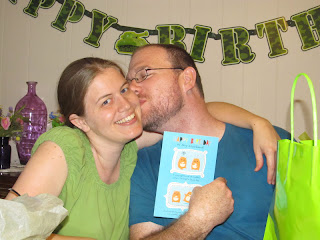 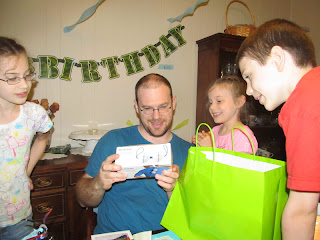 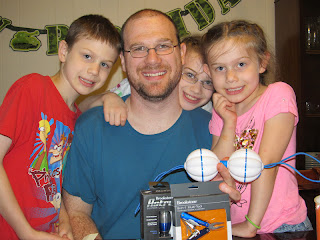 As he's admiring his new LED light...Iris decides to show him the merits of her back messager ;) 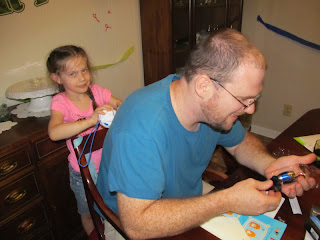 It was a great party...probably one of my favorites yet!

Happy Birthday (late) Babe, I love you more than EVER.  You're the best husband I could imagine!
Posted by mirandagail at 9:18 PM