Day two at Universal, we decided that even though we were going to Universal Studios for most of the day, we would start in Islands of Adventure so we could ride the Hogwart's Express to the Studios park and back.

Since we had already been through Islands of Adventure, we kind of went at a more relaxed pace and took advantage of some fun photo ops... 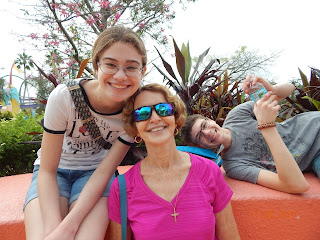 Iris and Clyde walked up to this fountain, and it started talking to them and having a conversation with them.  And if they teased it too much it would increase the water pressure and splash them.  It was hysterical! 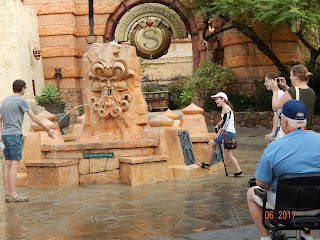 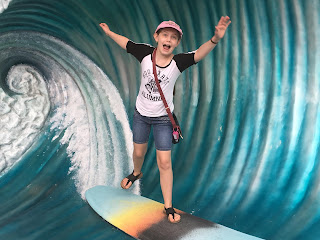 Ha!  This one cracks me up! 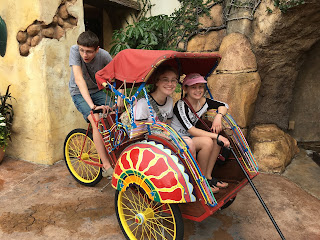 Everyone is excited about our ride in the Hogwart's Express!! 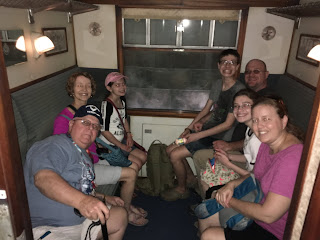 It did NOT disappoint!  Seriously, the Express is so fun (if you're into Harry Potter, if not, then it's not worth the extra money) 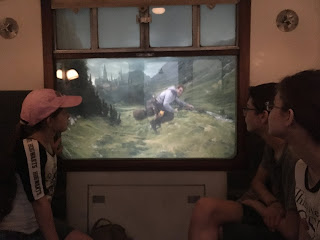 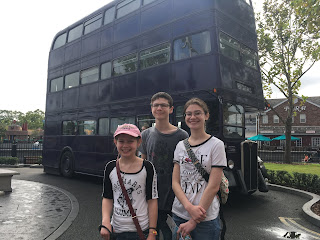 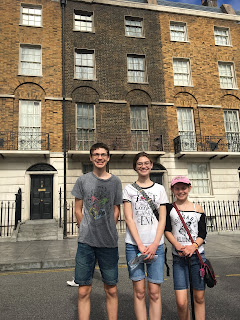 Sneaking in to the Ministry of Magic... 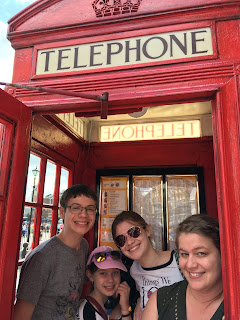 Our first glimpse of Daigon Alley!  It was wonderful! 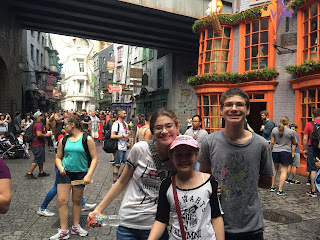 Gringott's Bank!  The dragon really breathes fire, and there is a VERY cool ride in Gringott's!! 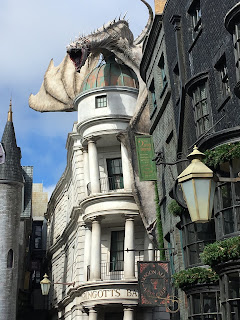 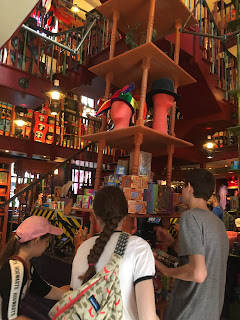 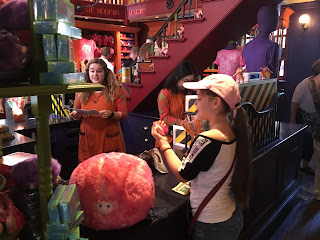 Lucy next to the counter where the tellers are at Gringott's Bank... 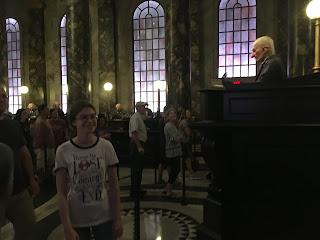 On the Escape from Gringott's ride...  Lucy is pretty game for most rides, but she does have a phobia of fire, so if there are fire breathing dragons and she can actually feel the heat, that goes on the clutch-daddy-tightly list. 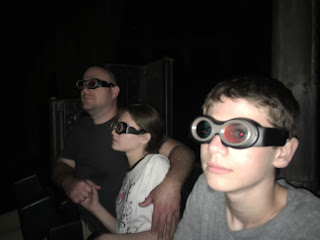 We ate at a shockingly quiet, nice, and tasty restaurant called Lombard's Seafood Grill.  I highly recommend this place; it gives you a nice air-conditioned break, during which, you will forget you are in a theme park. 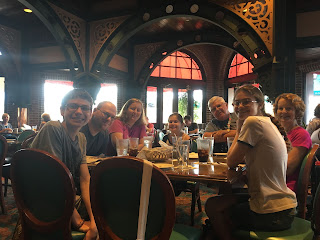 As we ventured away from the Harry Potter stuff, we arrived at the Men in Black ride.  This one is SUPER fun!! You're shooting at targets as you practice being an agent, and you are competing with others in your car.  We all loved it! 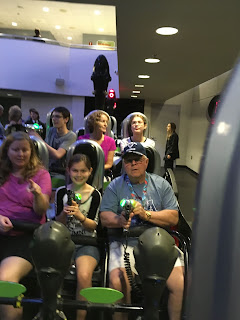 Next was ET.  This one is nice and cool, and leisurely.  The flying scene is beautiful, and you're on a bike, it kind of gets a bit weird after that, but we still really enjoyed it!!  And Iris may have fallen in love with an ET plush doll at the end. ;) 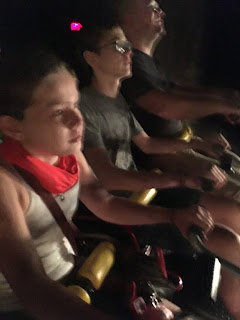 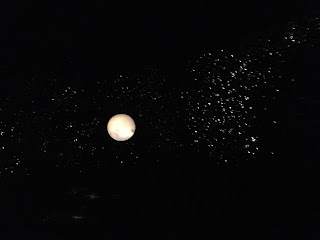 Papa making Iris laugh after she was close to having a panic attack.  Yup, anxiety can even follow you to your vacation destination, but thankfully for us, it left her fairly quickly. 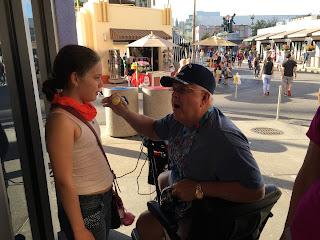 The Minion ride was next and EVERYONE of us laughed SO hard just while we waited in line!!  Seriously, waiting in line was hysterical! 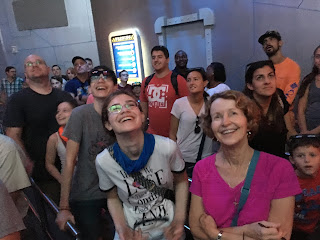 After the Minion ride, four of us rode transformers!  It was great!  We are huge fans of Bumblebee, though. 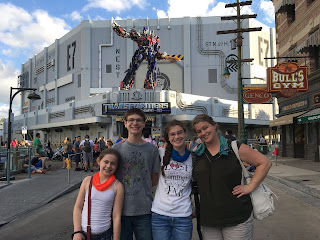 We ended our loop through Universal Studios back in Daigon Alley, and the kids went into the wand shop.  It was gorgeous, and very realistic! 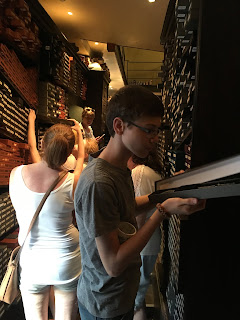 I attempted a pic of Stephen and kids outside Gringott's, but I had too much backlight. 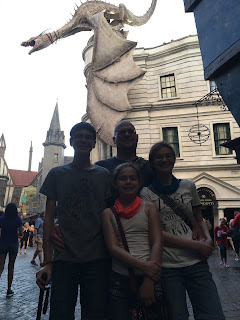 We went back to the Hogwart's Express. 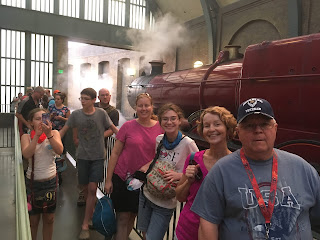 And after ending up BACK in Islands of Adventure, and walking to the exit of the park, we were all exhausted.  We very gratefully stumbled into Margaritaville for dinner. 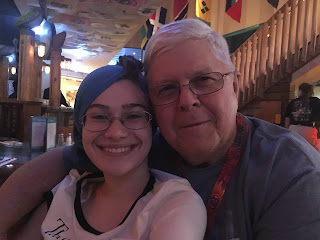 A very funny and friendly balloon guy on stiltz ( our table was up high) chatted it up with Iris while making her a sword. 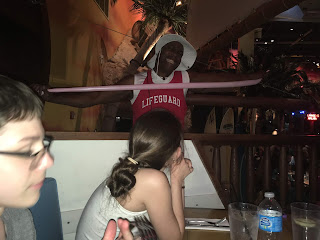 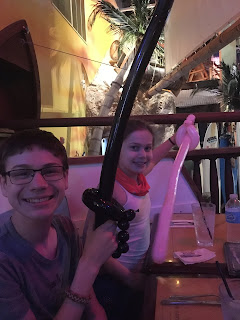 It was a REALLY super fun, and amazing day!!
Posted by mirandagail at 7:26 PM