When we brought our first ferret home, we scoured names online.  I read lists over and over to the kids so they could agree on a name.  They decided it needed to be a flower name, and though it took a LONG time, they eventually agreed upon "Lavender."

Our ferret seemed listless and bored.  We figured she needed a friend, since ferrets are social animals.  So we eventually brought her a friend.  The kids now decided she needed a flower name that started with "L" to match Lavender.  But Daddy had never named one of our pets, so we handed him the list of "L" names and he dubbed her "Laurel."

Many of you may remember that last November Stephen made a deal with Clyde.  Clyde had been persistently begging for a ferret, but never wanted to help care for the ones we had (our other two weren't any better about this, but weren't begging for new ones).  Clyde and his Daddy agreed that if he would clean the cages and empty the litter box for A YEAR, then he could have a new ferret of HIS OWN!  Clyde was PUMPED.

His enthusiasm quickly died.  During a weak moment, he wanted to take the deal back.  But Stephen didn't let him.  A few weeks later, he was glad Daddy had made him stick to it, but he still had months to go.

When the day came, he had any that were boys, large, or any that bit hard.  He didn't want his new ferret to be mean to the ones we already had at home.  He settled on a cream-colored, baby girl with a gray triangle on her forehead with a very sweet disposition.

He had me print a list of "L" flower names and meticulously whittled it down.  He finally chose "Lupine" pronounced /LOO pin/.

Unfortunately, I didn't get many early pictures of her while she was still pretty small, she's already grown a good bit just in a few weeks.  She moves so fast, my pictures are blurry.

Here are the first two clearish ones I got... 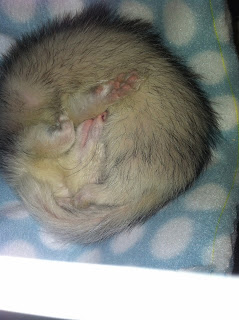 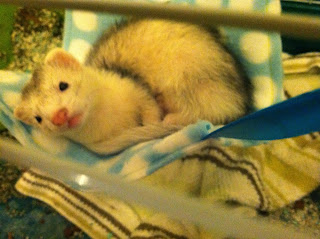 A more recent one 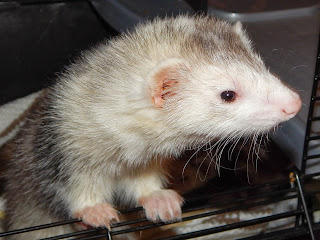 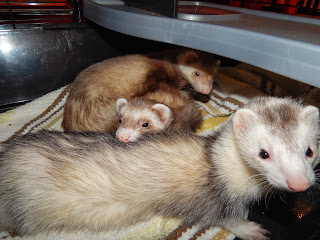 A boy and his ferret. 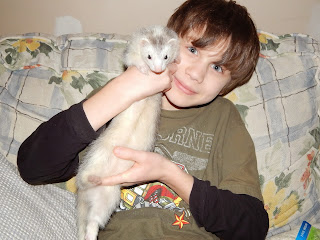 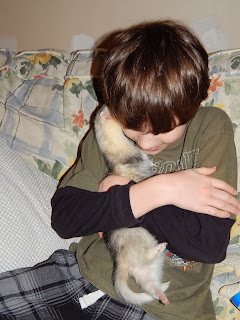 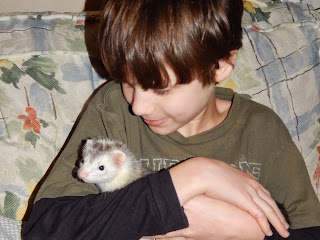 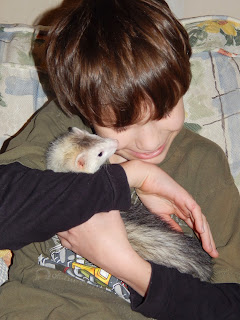 Posted by mirandagail at 9:34 PM