I think this is only the second time that we've 'done Christmas' was just the 5 of us.

The kids woke up before us, and as soon as I heard them awake, I had a moment of panic that Stephen and I might not get to be the first ones to wish Lucy a happy birthday.  That has NEVER happened before.  I was right.

After some giggling and shuffling around, I heard Iris and Clyde burst into an enthusiastic rendition of "Happy Birthday to You!"

It was very sweet...so I decided not to be TOO sad about not being the first one.

Then we all had breakfast.  Daddy read the Christmas story.

And since we normally start oldest to youngest opening gifts, we reversed this time.

Iris with the ONE AND ONLY thing she asked for this year....until I basically forced her to make a longer list. 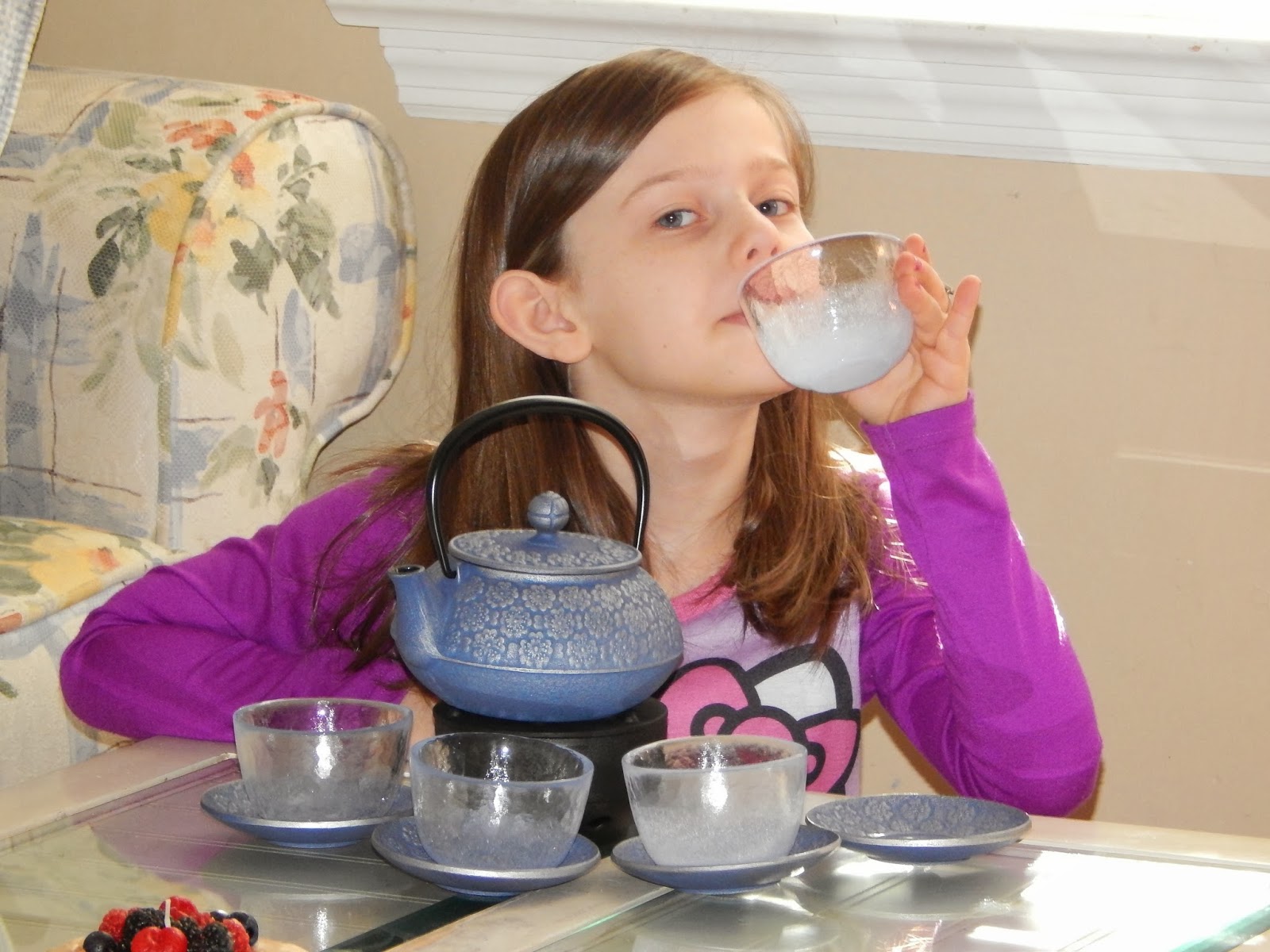 I decided to use more of the candid shots on this post than the posed ones.  Here is Clyde marveling at the seahorse Iris bought him at the beach. 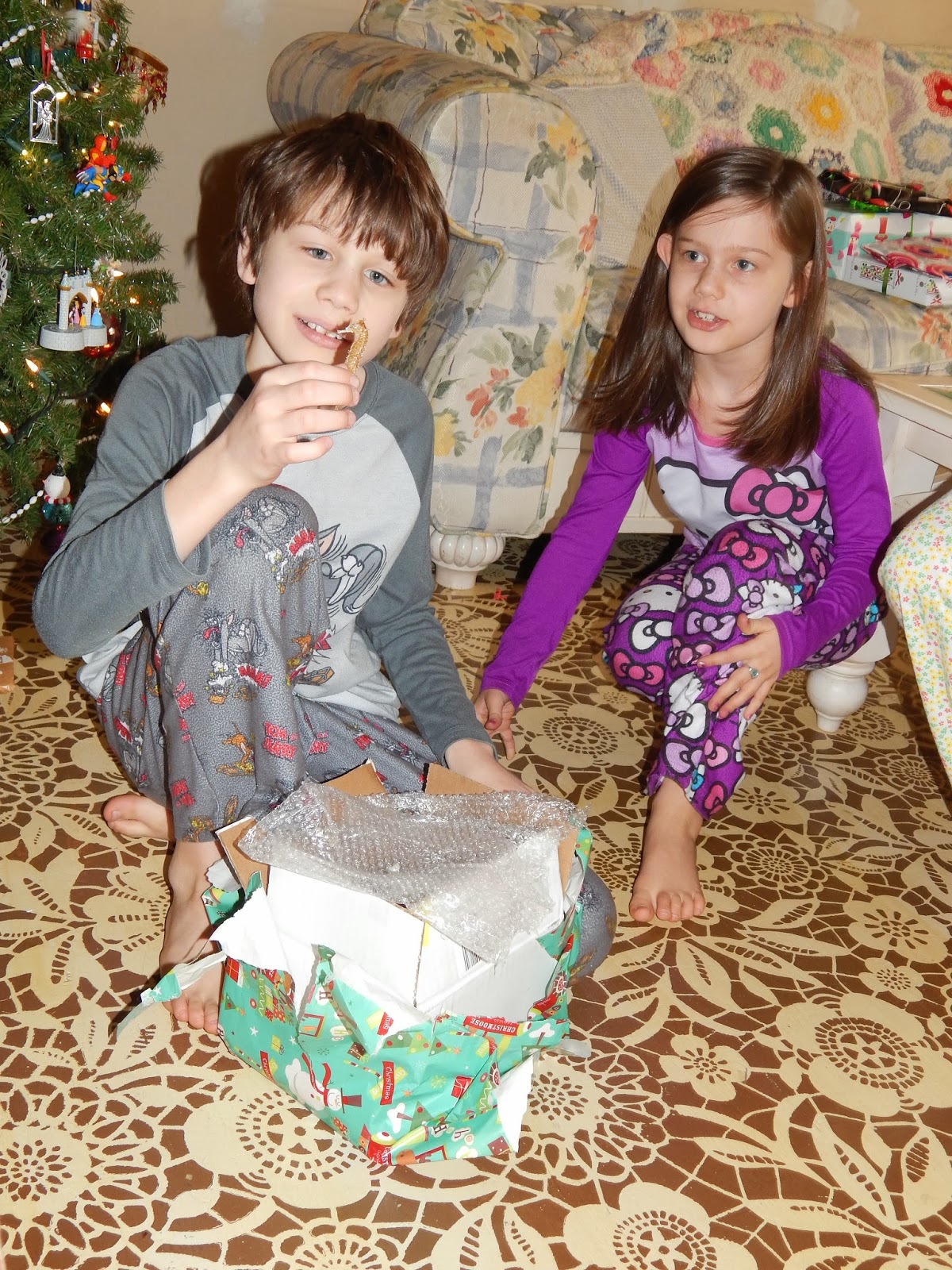 One of Lucy's most enjoyable hobbies right now is her stop motion movies she makes with legos.  So Iris got her a little set of speech and thought bubbles that can connect to a lego minifigure.  Notice how delighted Lu is and how nervous Iris looks... 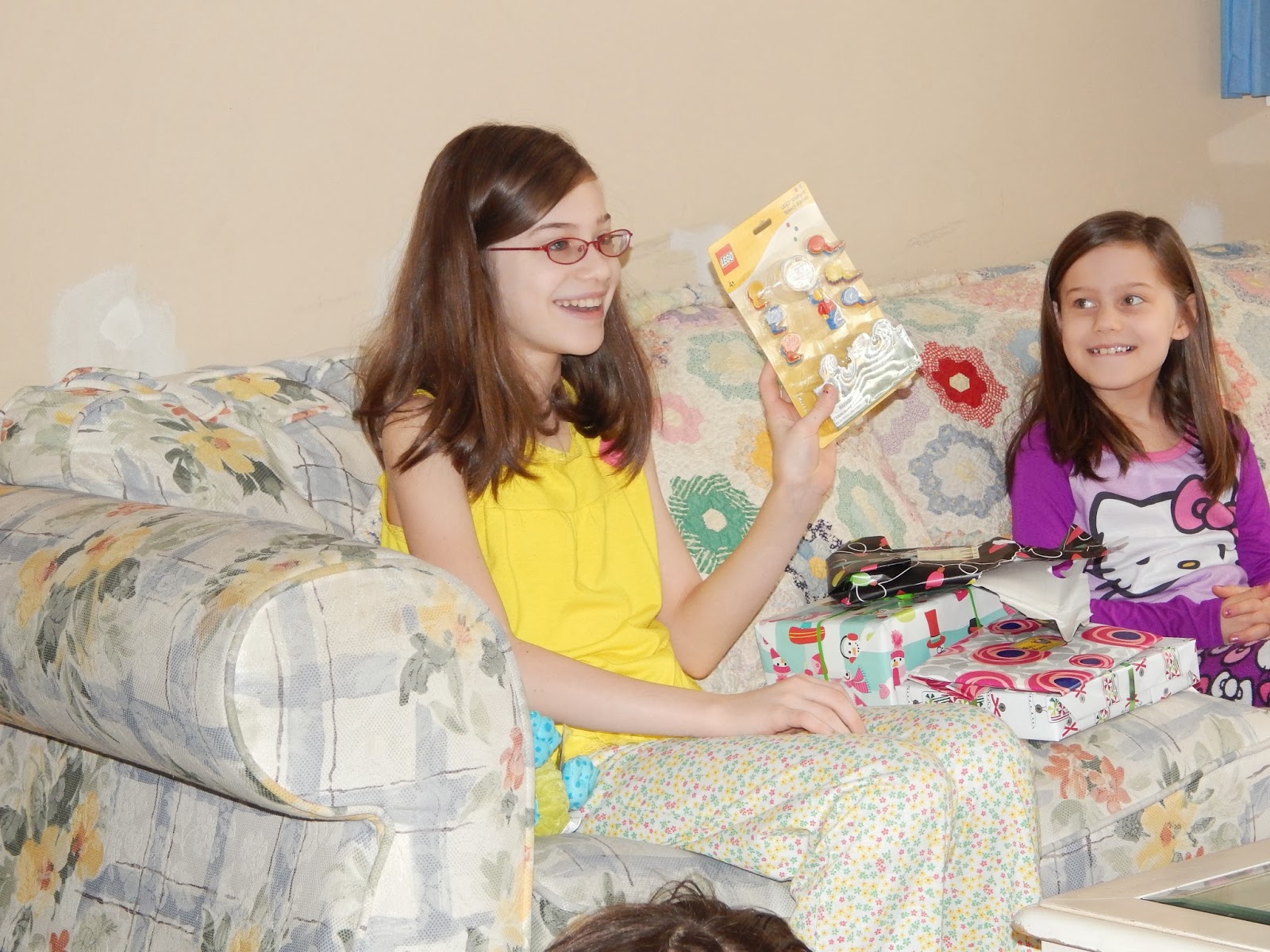 Clyde got me a giftcard to Logans!  I was so surprised, because that seemed like such a grown-up gift. 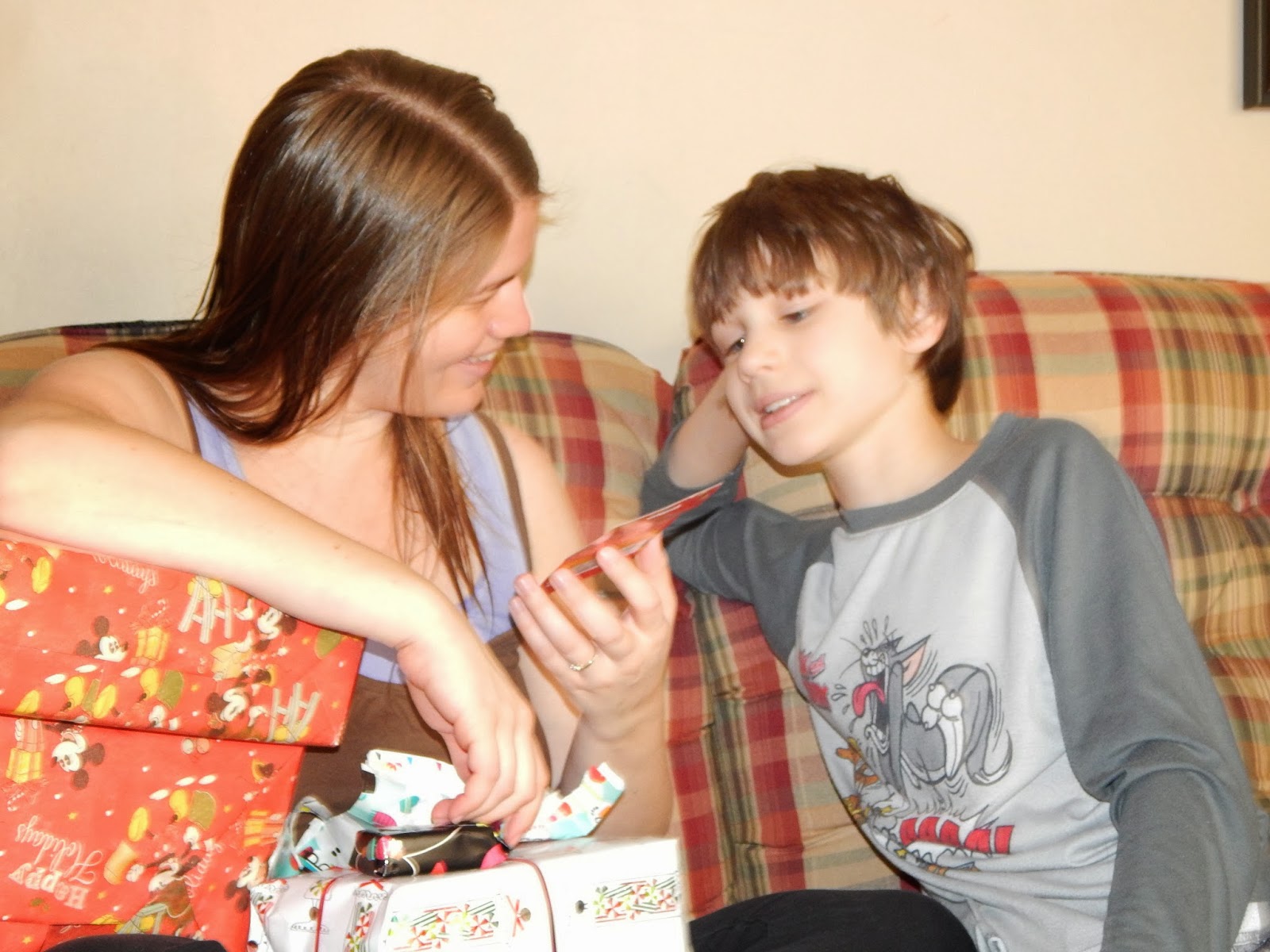 Daddy opened his back scratcher from Iris :) 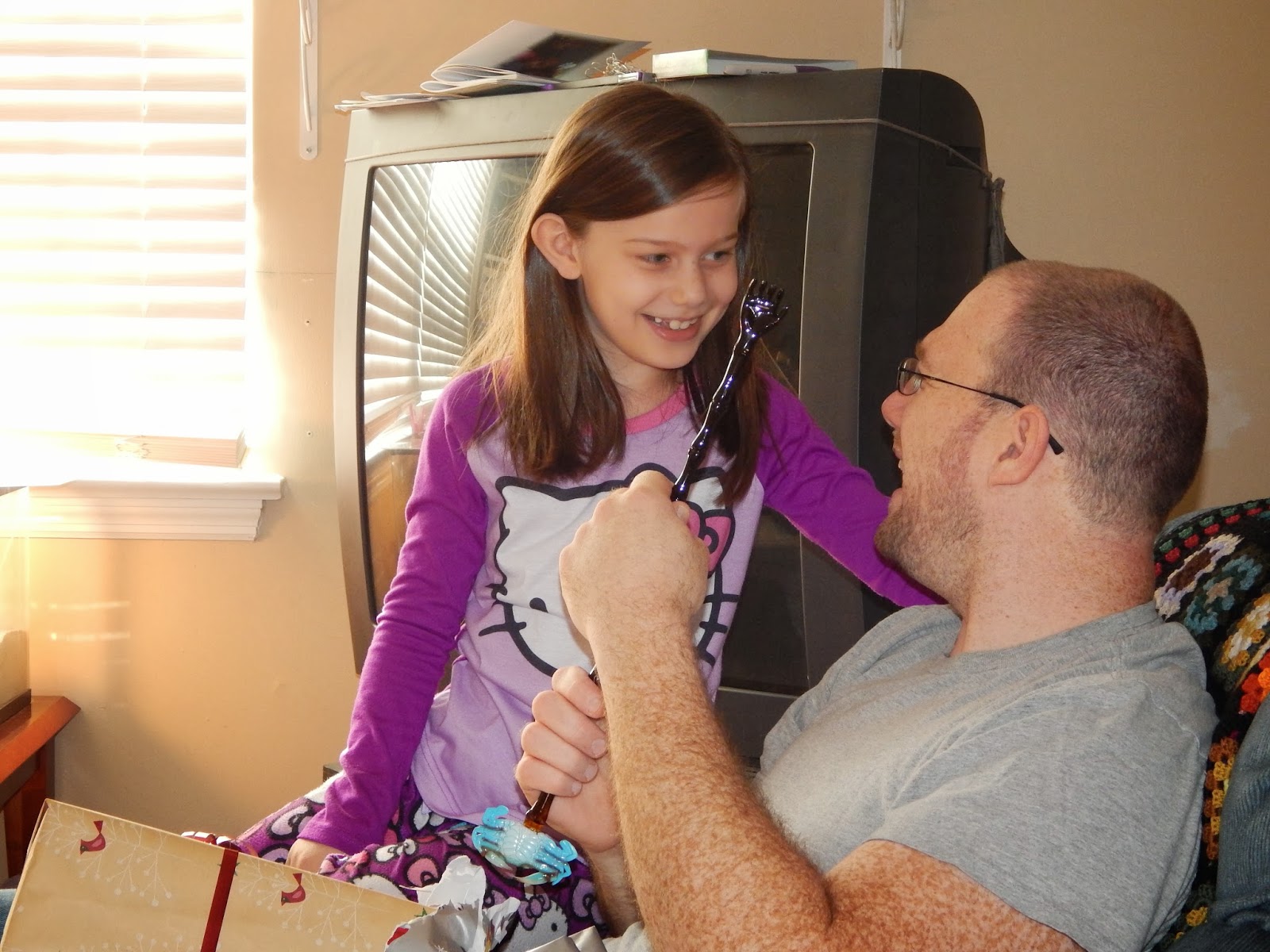 After the teaset, the next thing Iris put on her list was a policeman lego minifigure with handcuffs.  How is that for specific, bizarre and quite a jump from a nice tea set?  So Clyde got it for her and she was elated and kept yelling,"It has handcuffs!  It has handcuffs!" 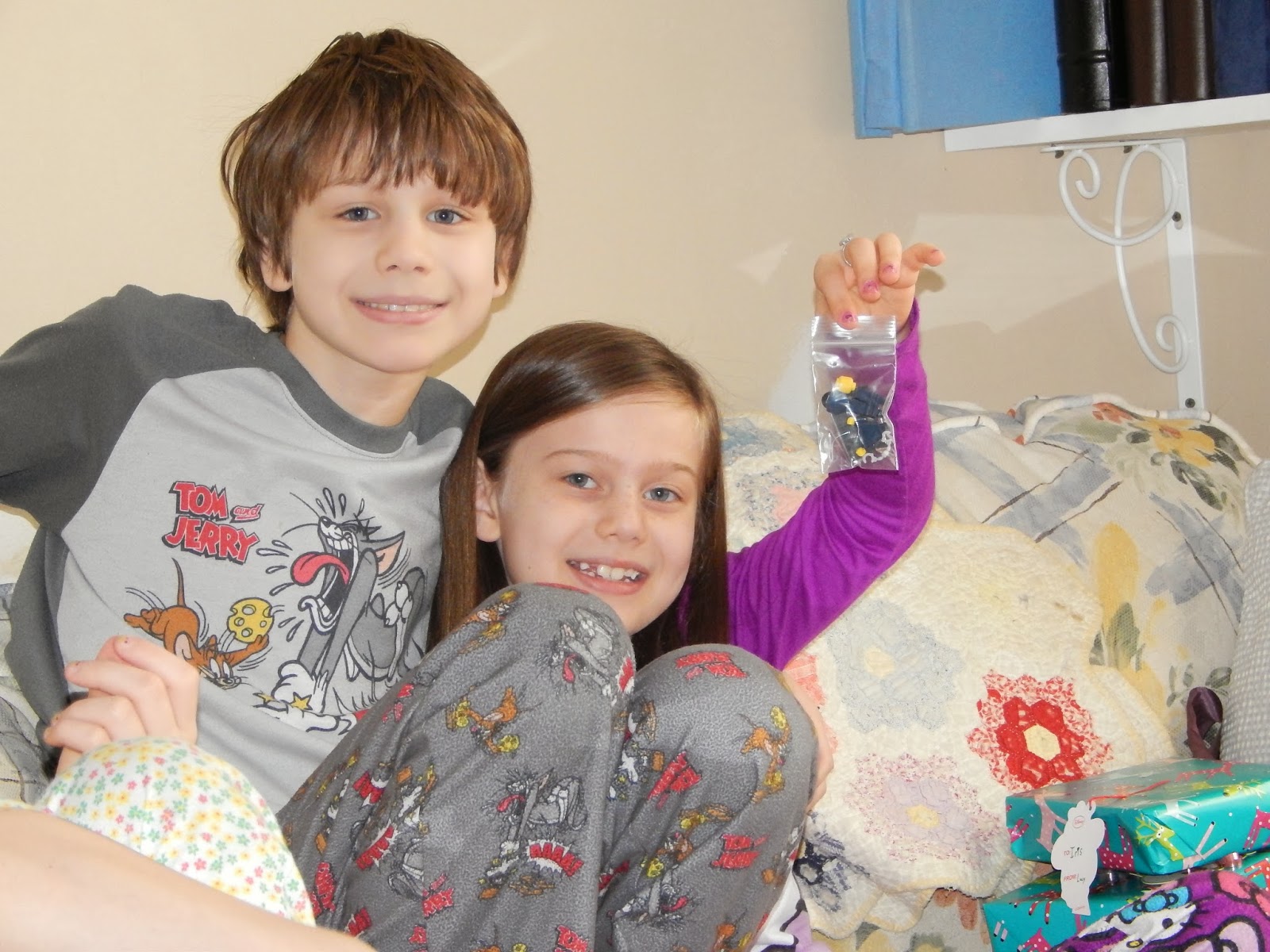 Clyde bought Lucy a sewing pattern for a dress that she had been eyeing. 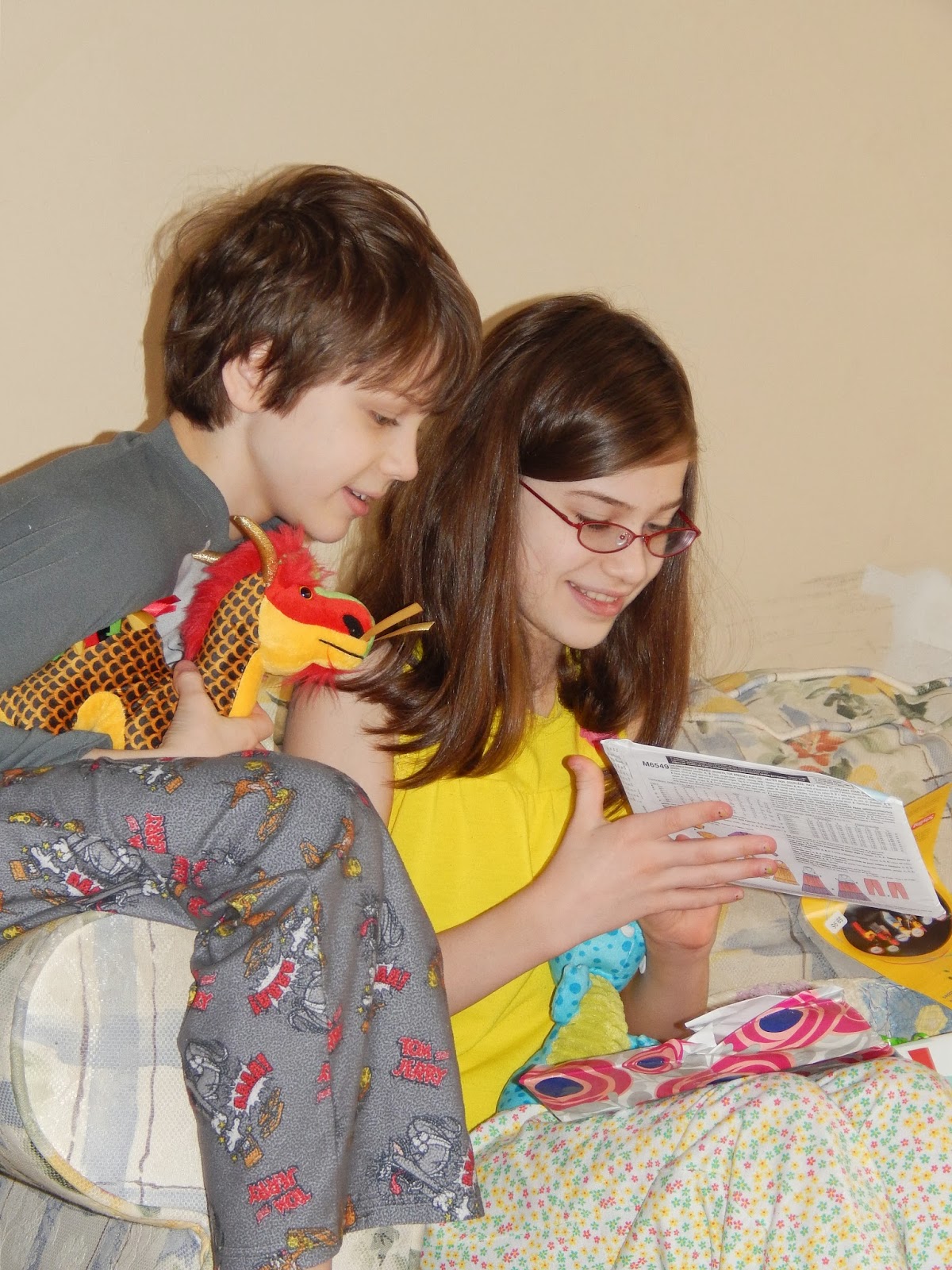 Lucy made me a little jewelry box.  She decoupaged it, and put flowers on it. 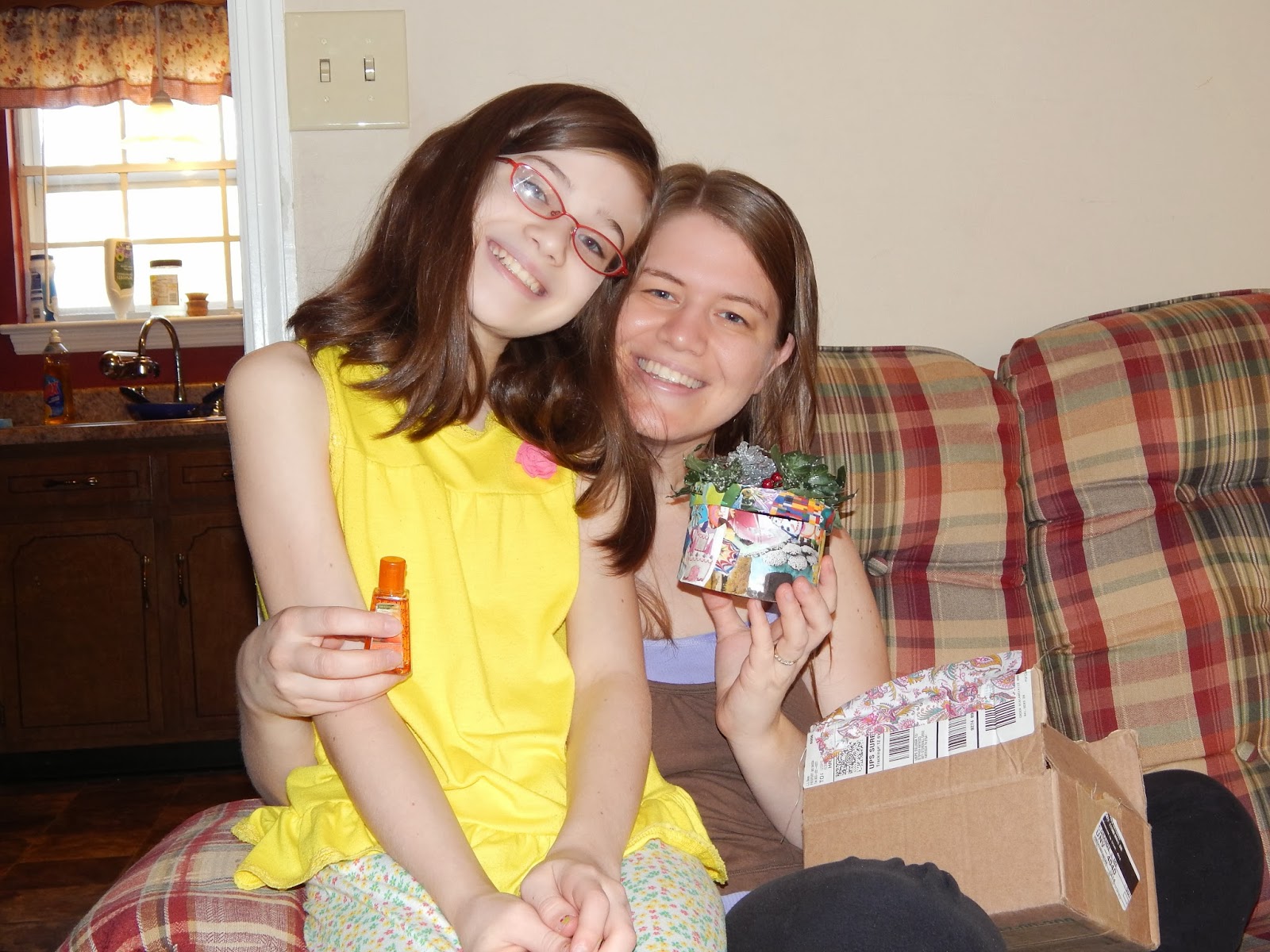 Clyde gave his Daddy some wires for his arduino. 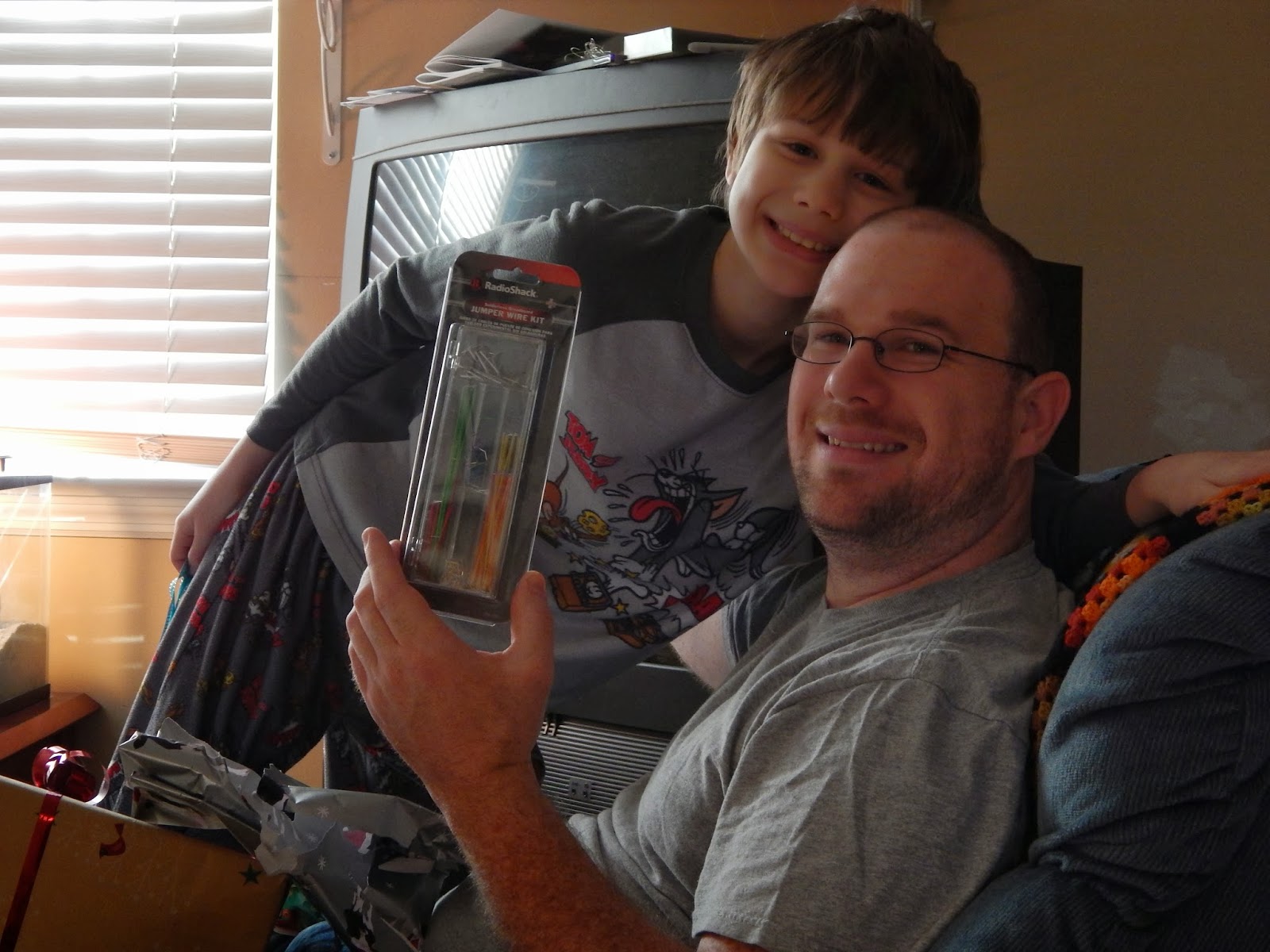 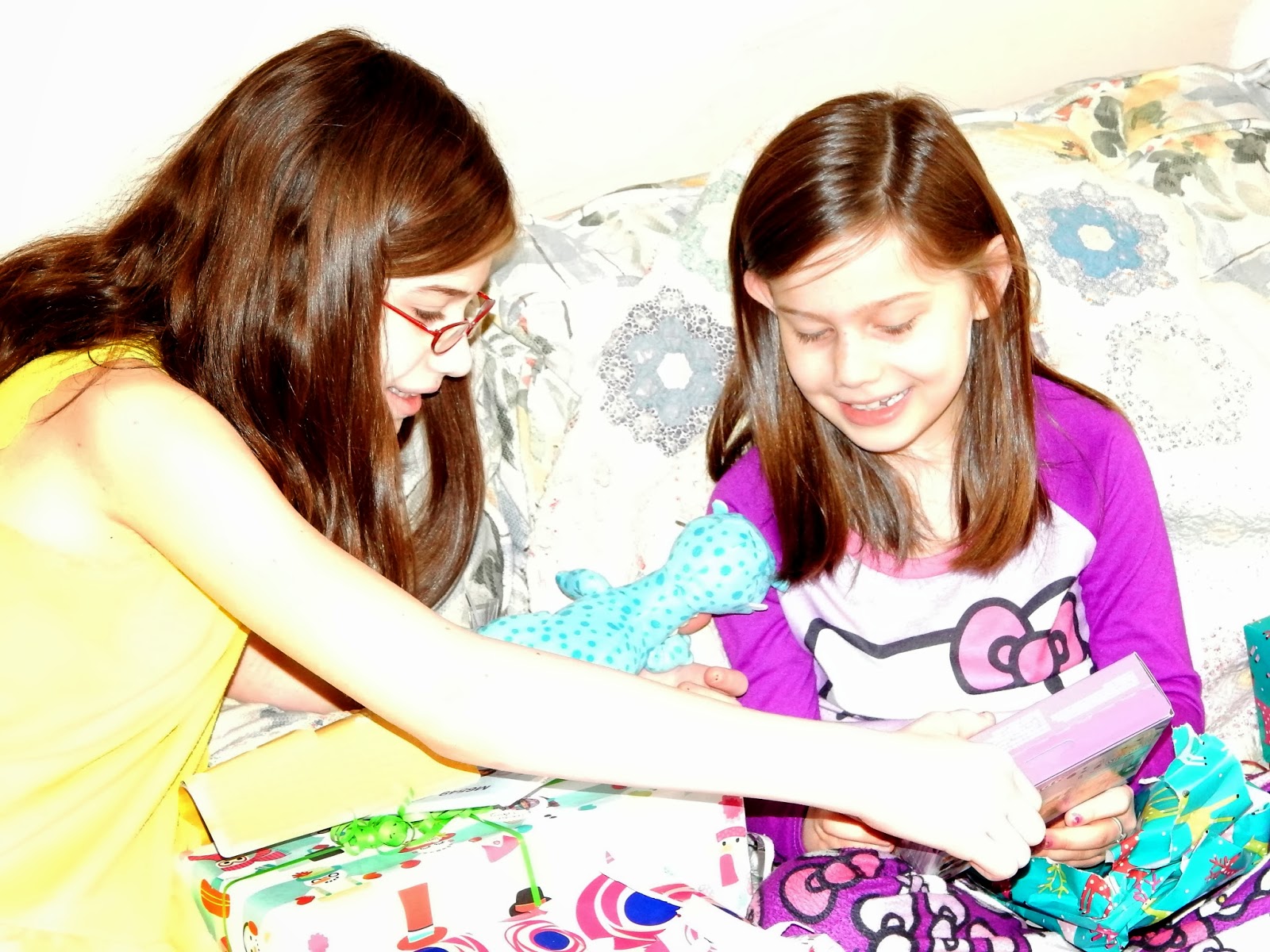 Clyde opened his nex bug nano v2 set from Lucy.  I have to admit, they're pretty cool. 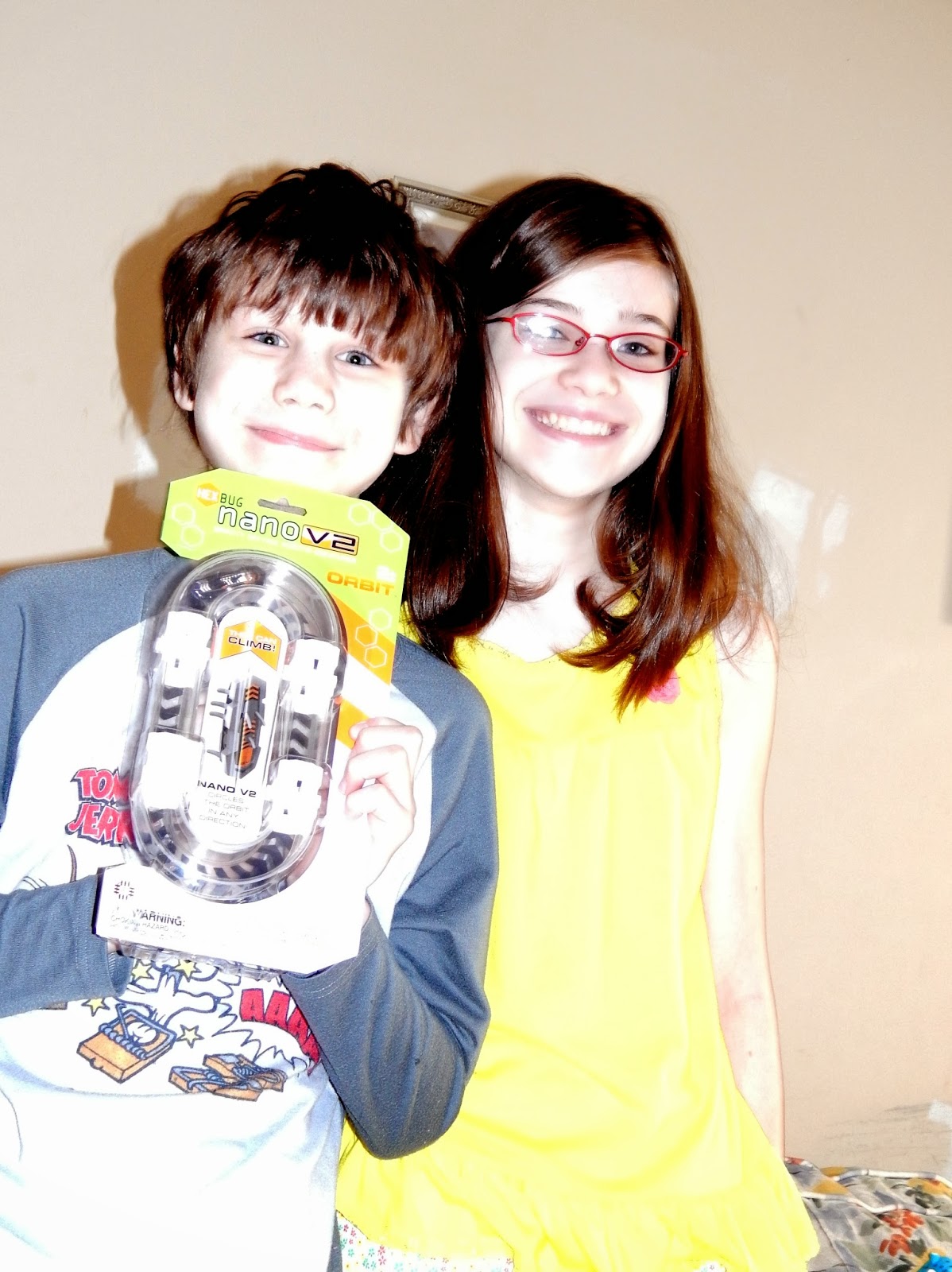 Iris bought me a necklace from the Tellus Science Museum gift shop. 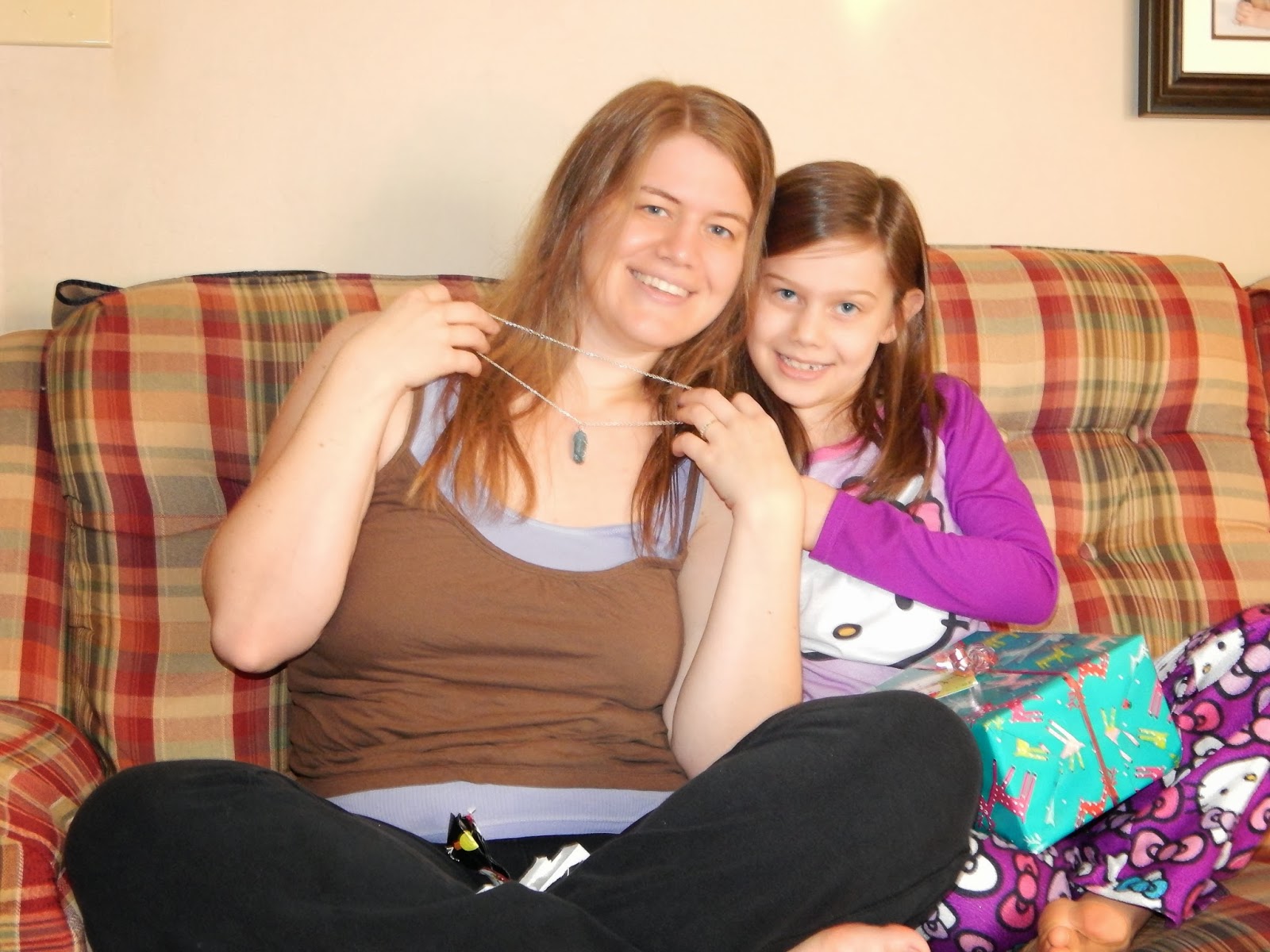 Lucy ordered this little sensor for Daddy's arduino that is is supposed to help a robot tell if it's getting too close to something. 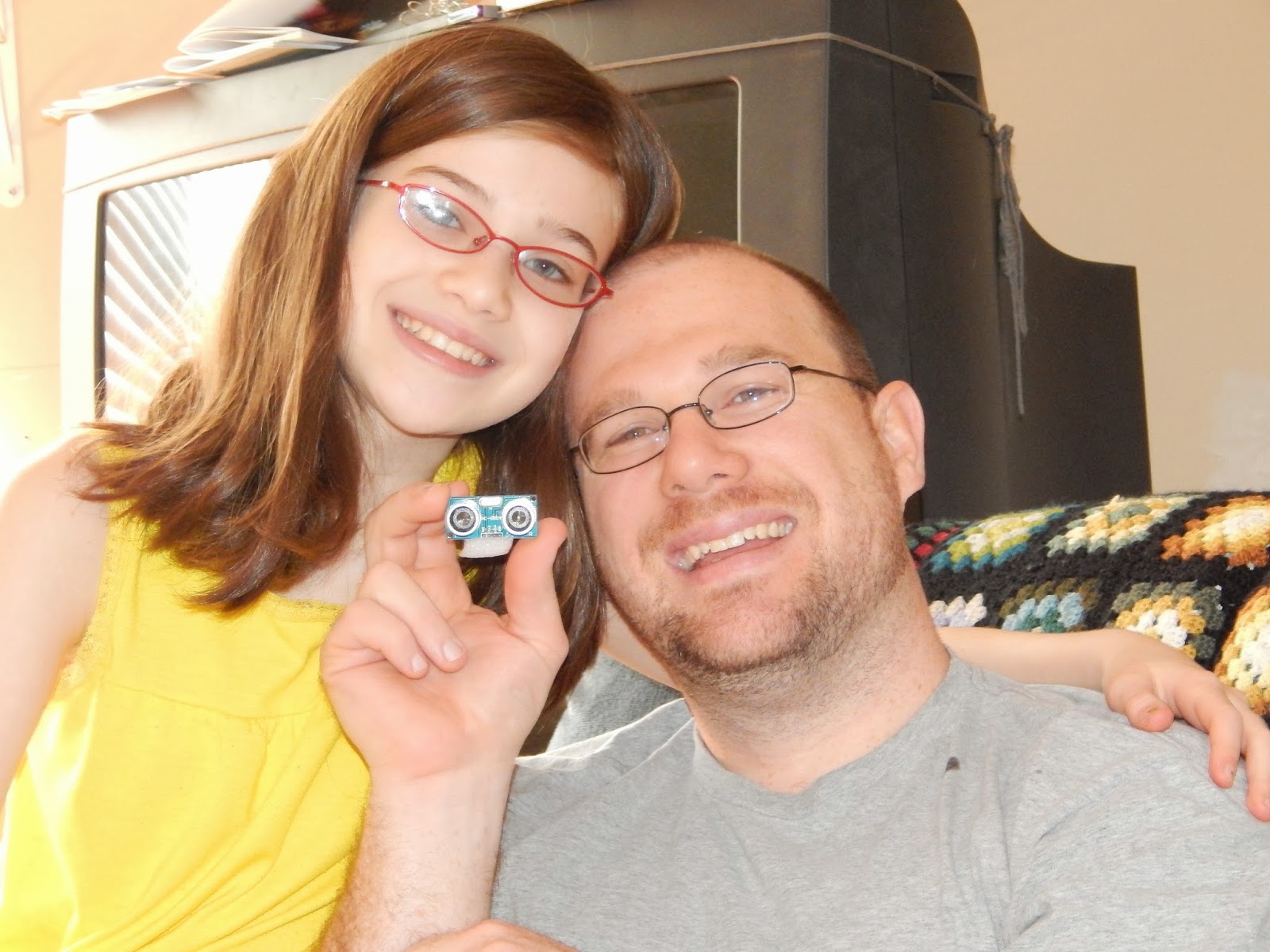 Clyde was apparently pretty pumped to get a set of domino racers! 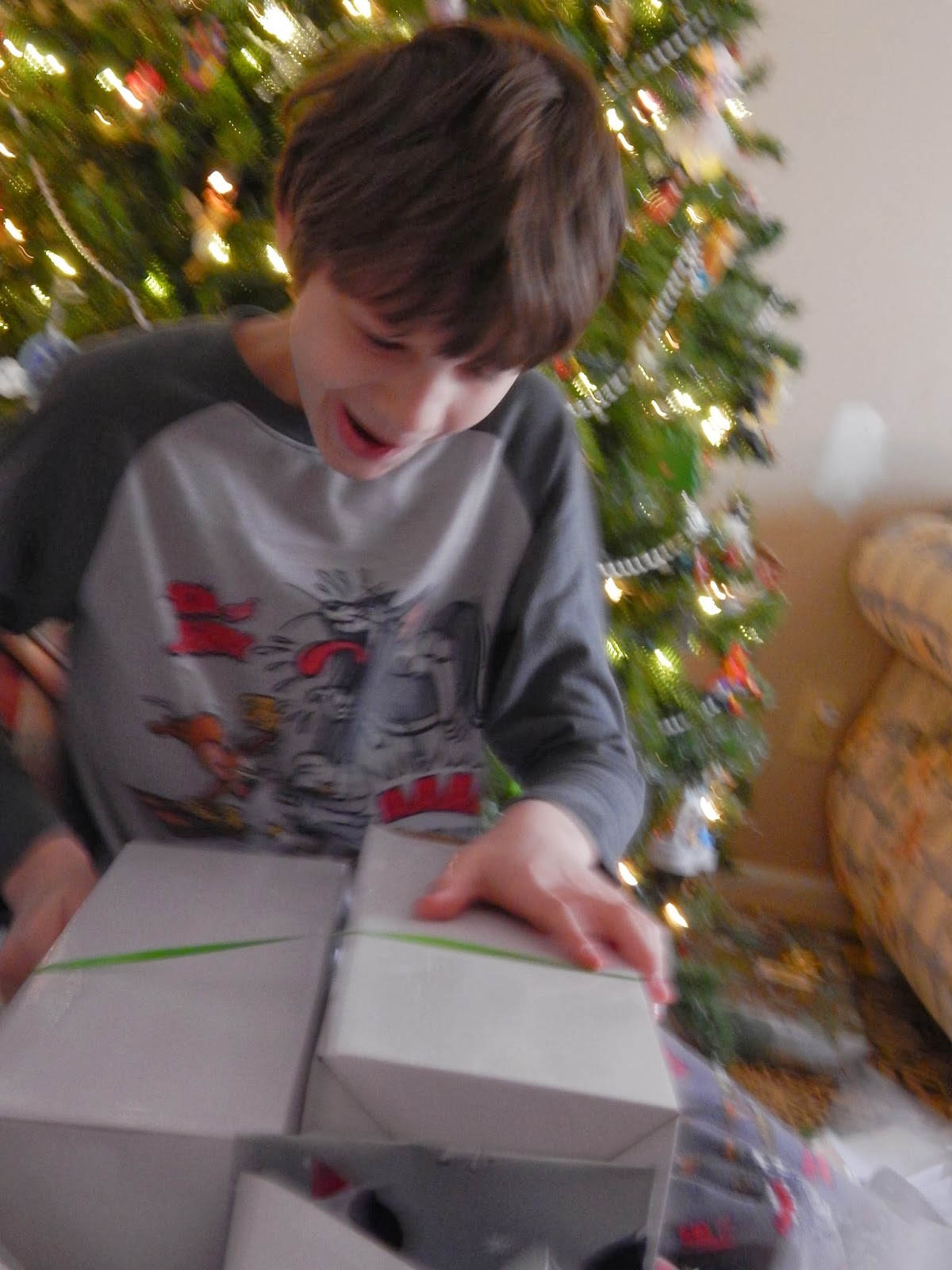 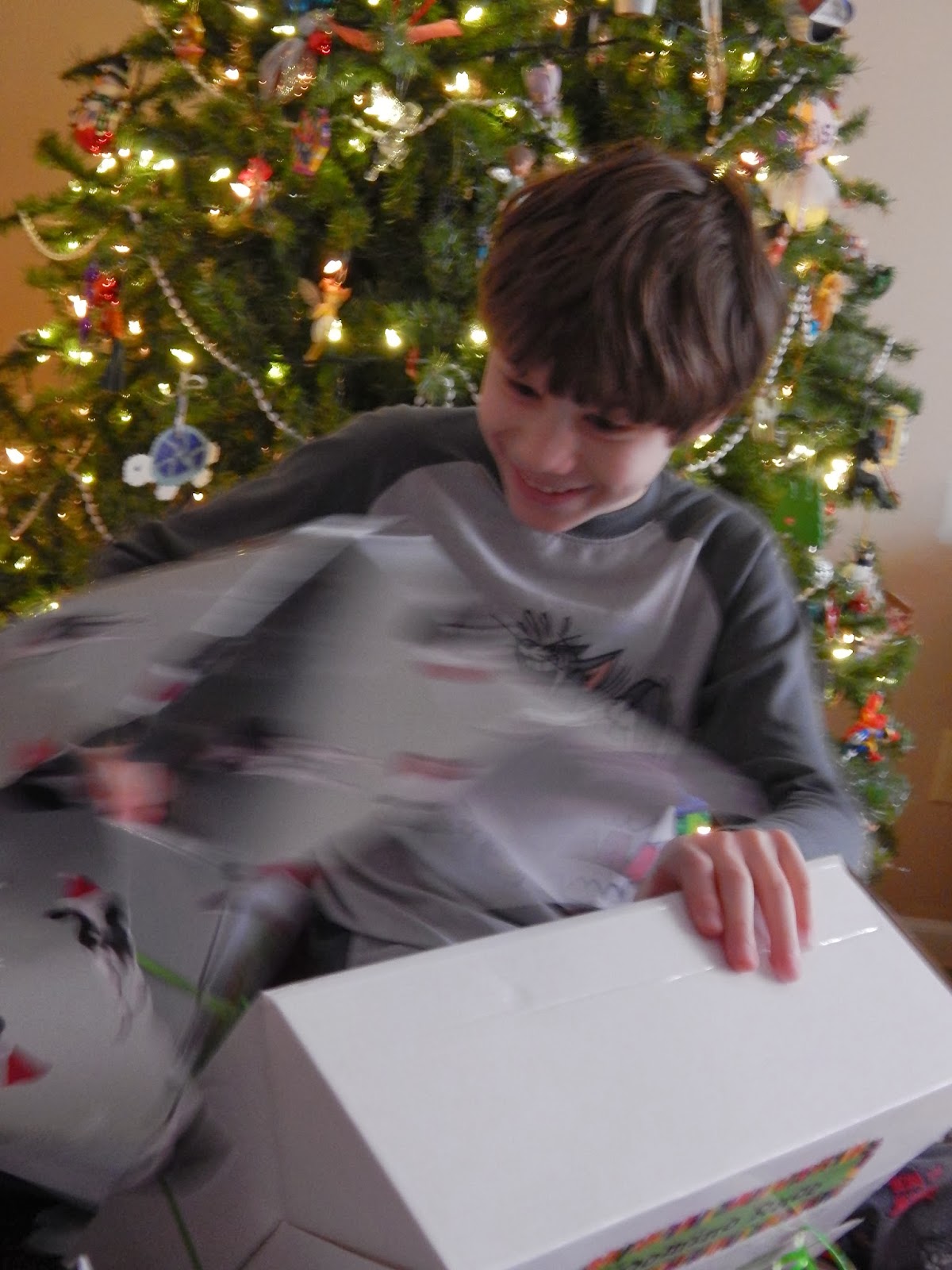 My robe from Stephen :) 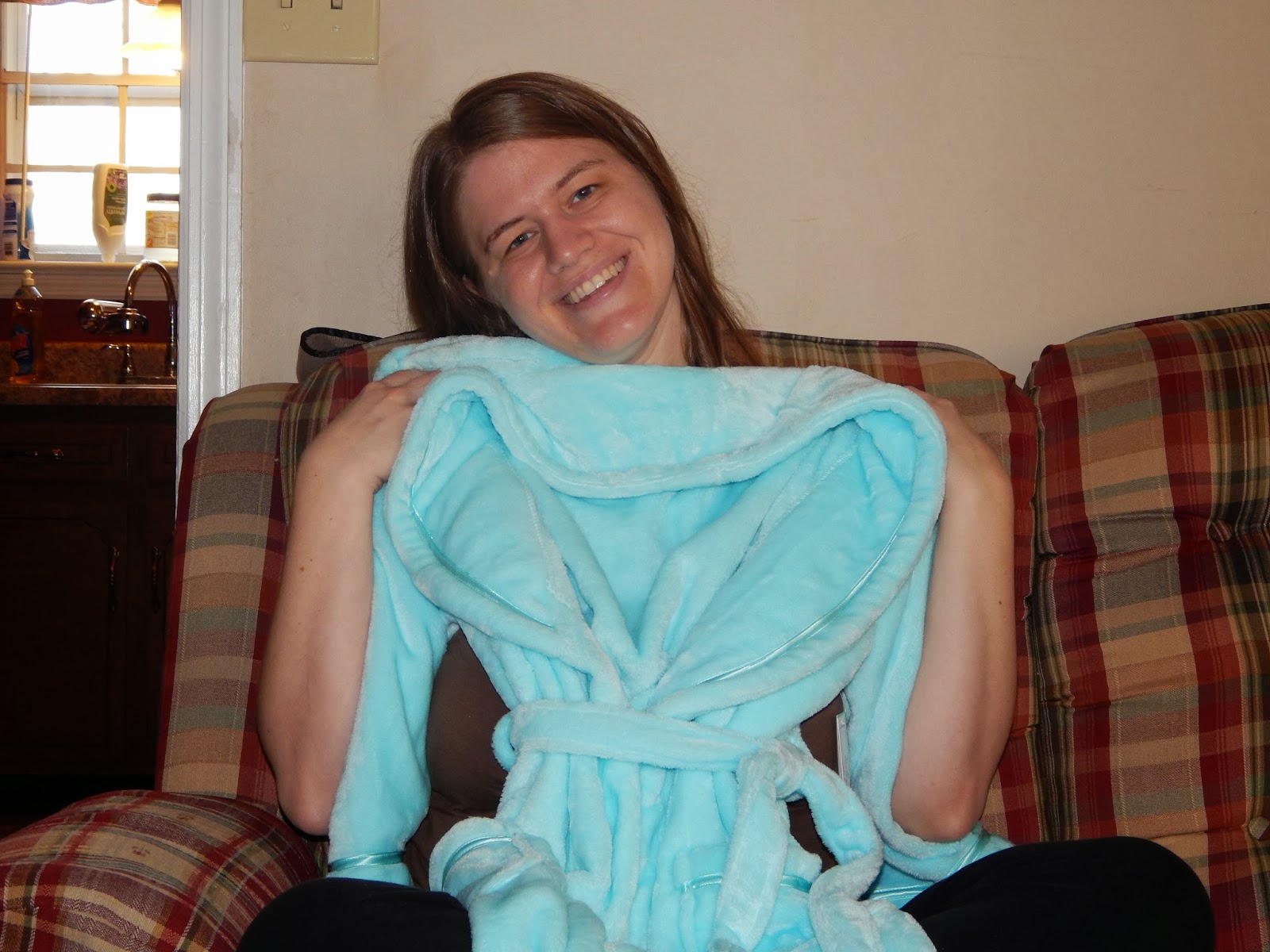 Stephen's toolbox for his arduino from me. 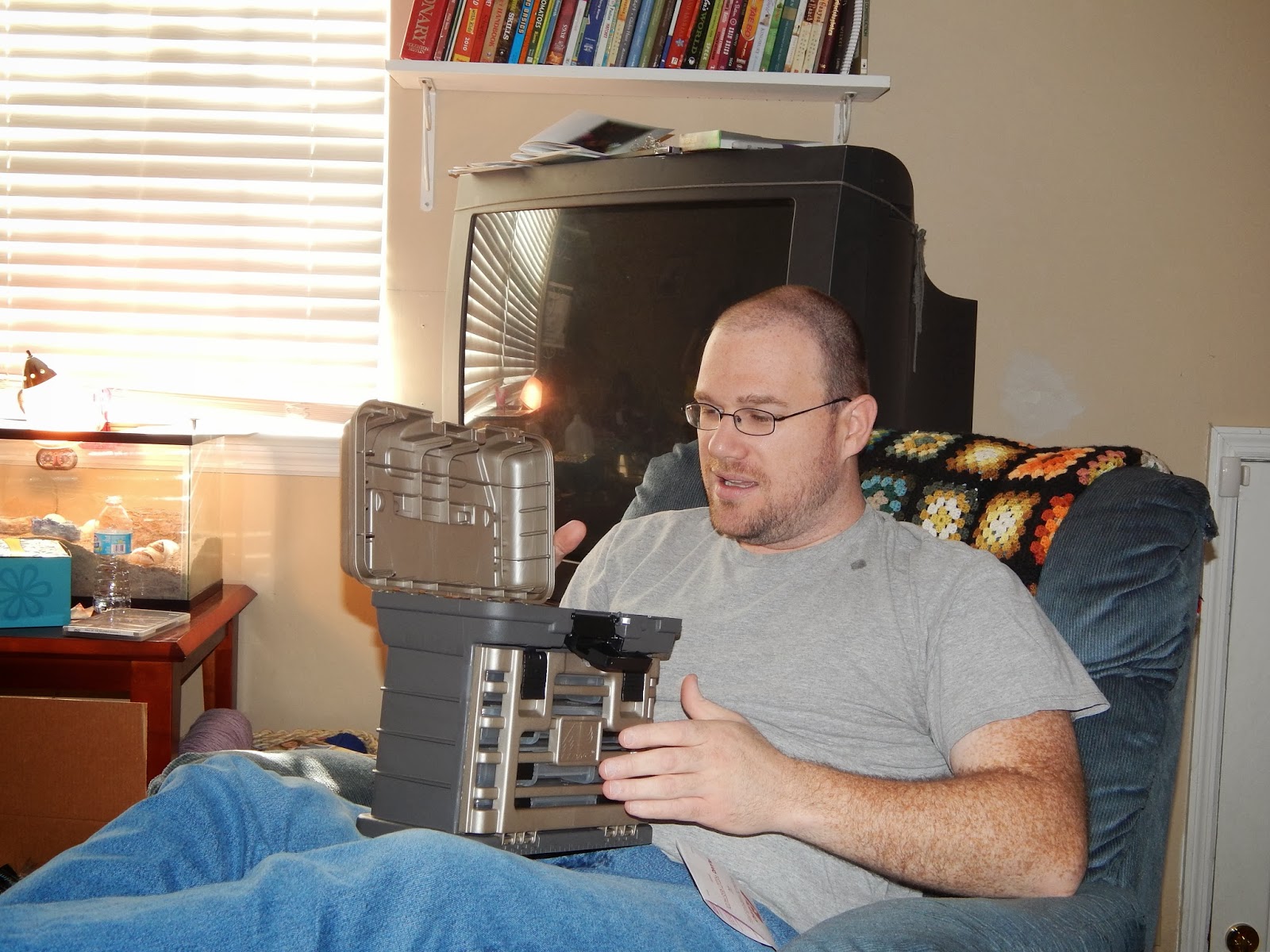 Lucy got the Origami Owl locket she had been wanting.  It's a little clear locket you can open and put charms in.  Hers has a sea turtle, knitting needles, a turquoise stone, a sewing machine, and an "L".  If you want one you can order one from my friend Elizabeth here: https://www.facebook.com/locketsbyelizabeth 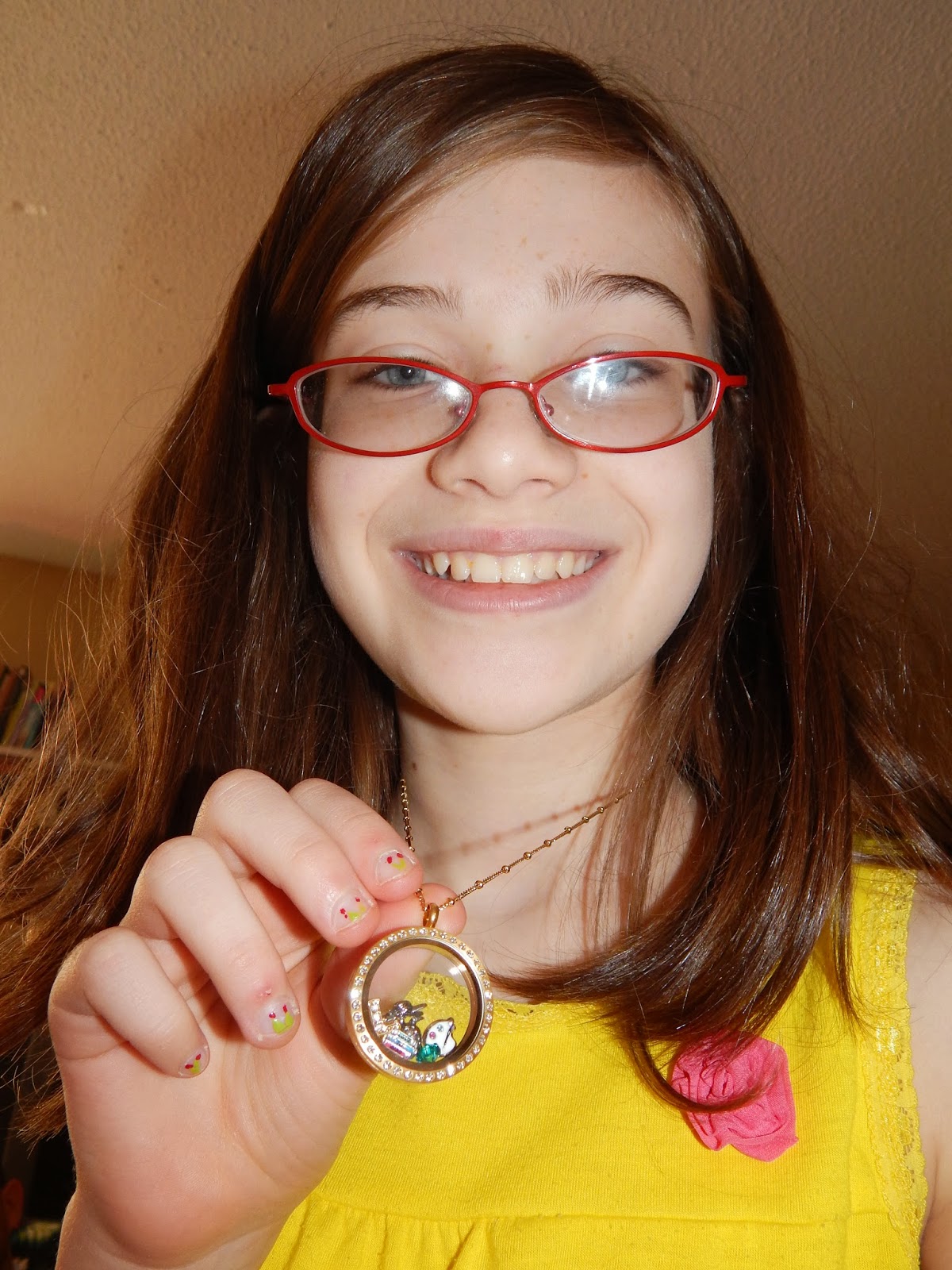 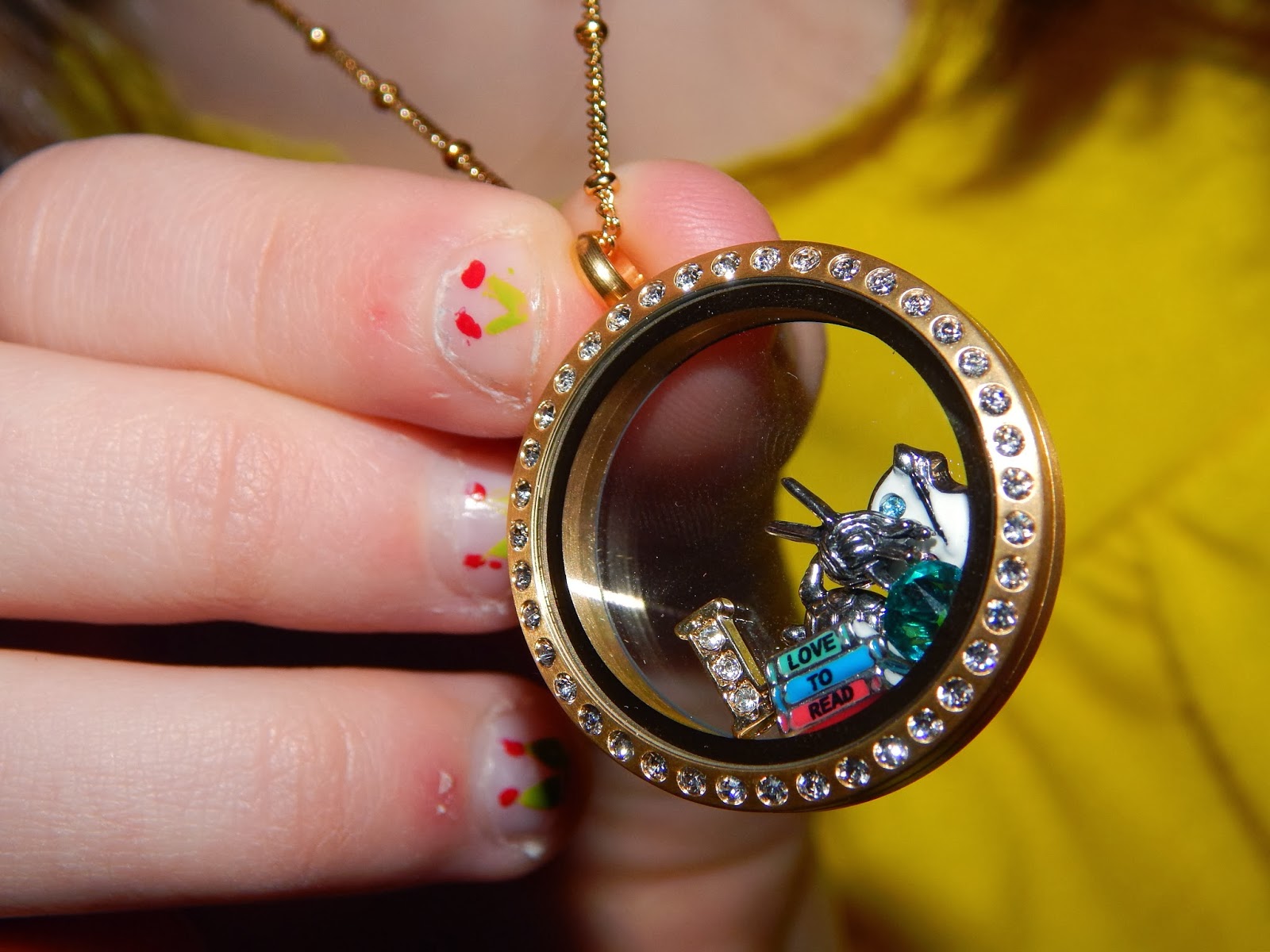 The rest of the day was just peaceful and fun.  We drove out to a playground and let Lucy have her first legal ride in the front seat as a 12-year-old.

Then we came home and the kids all built forts... 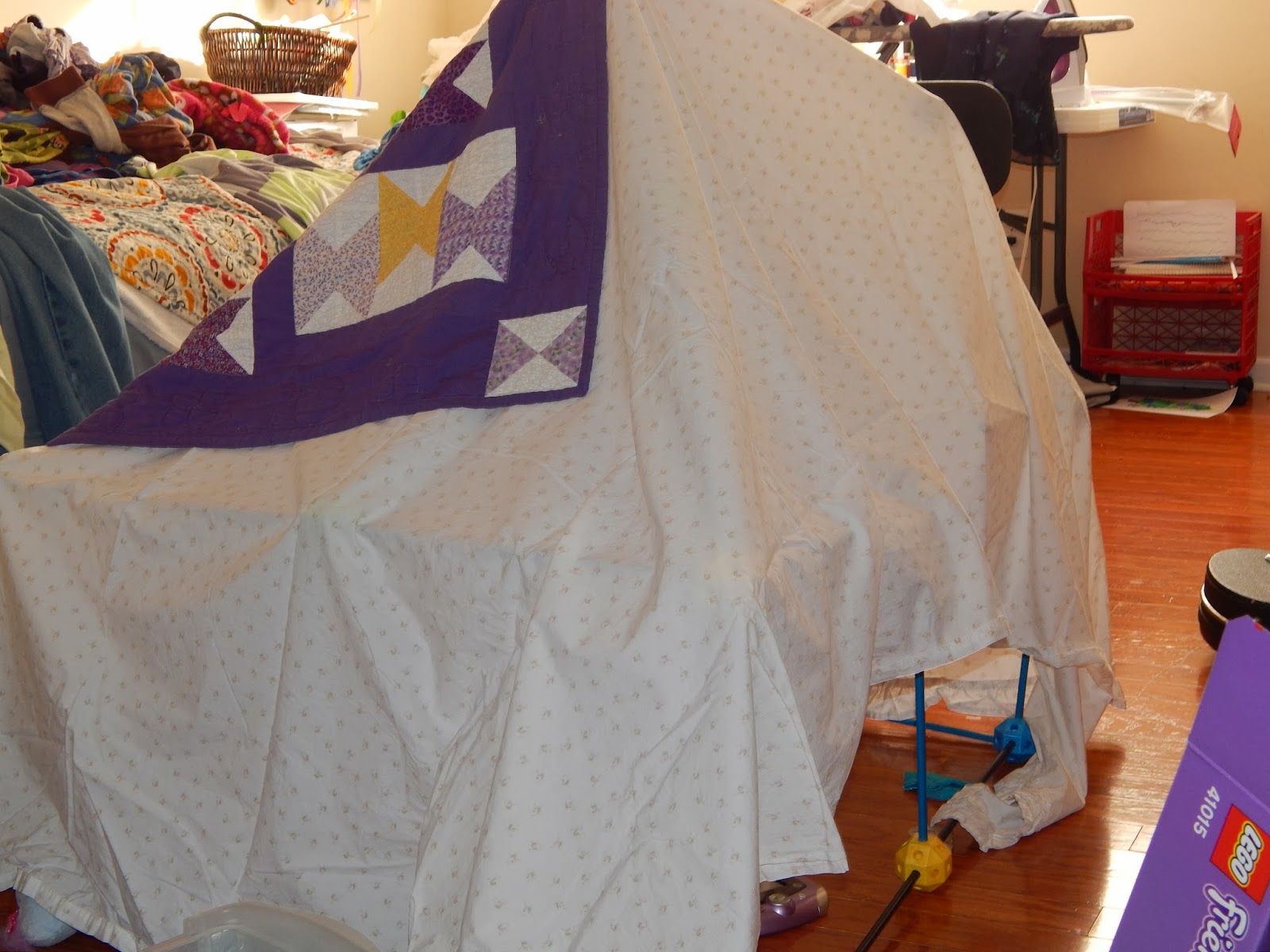 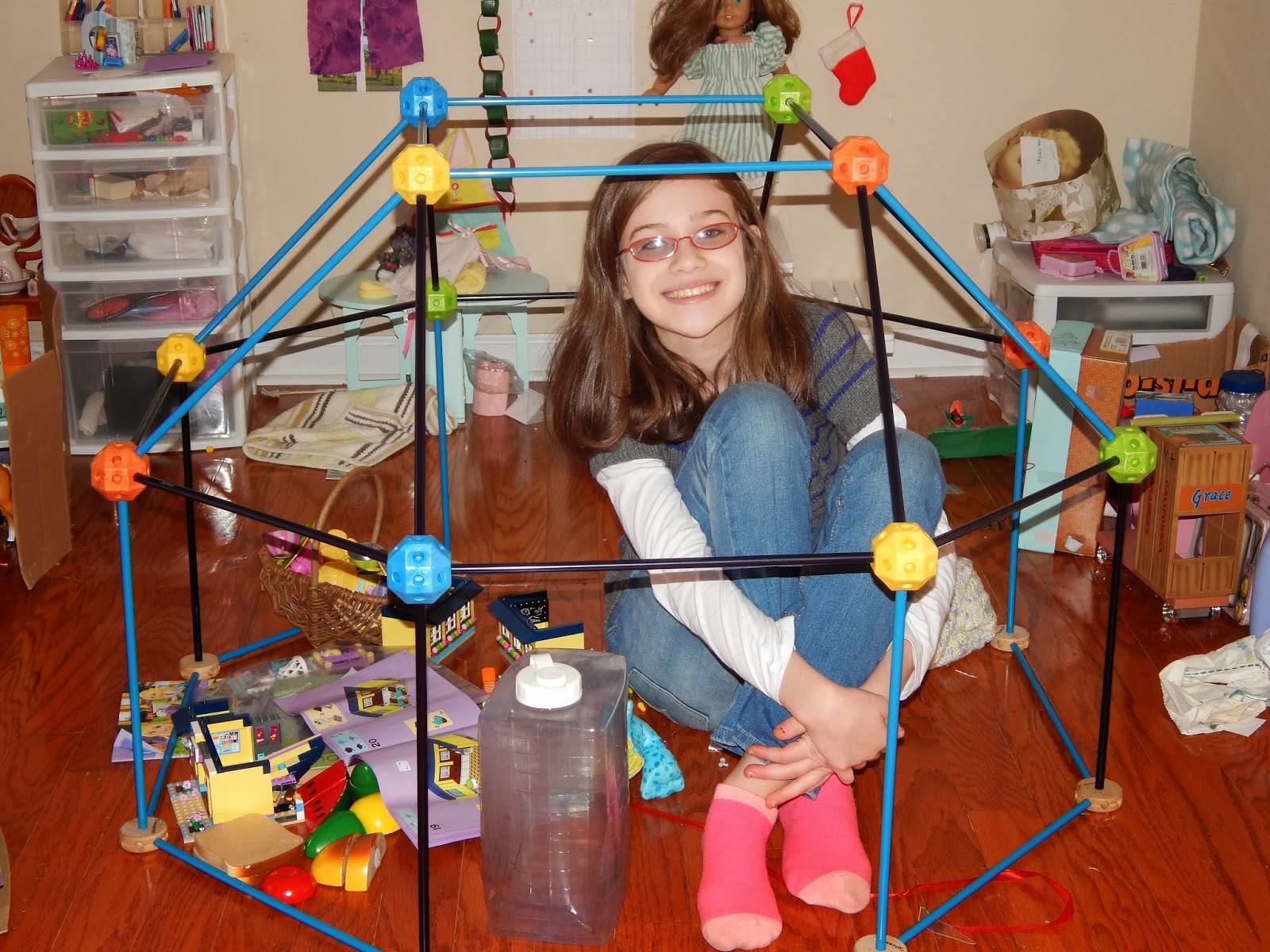 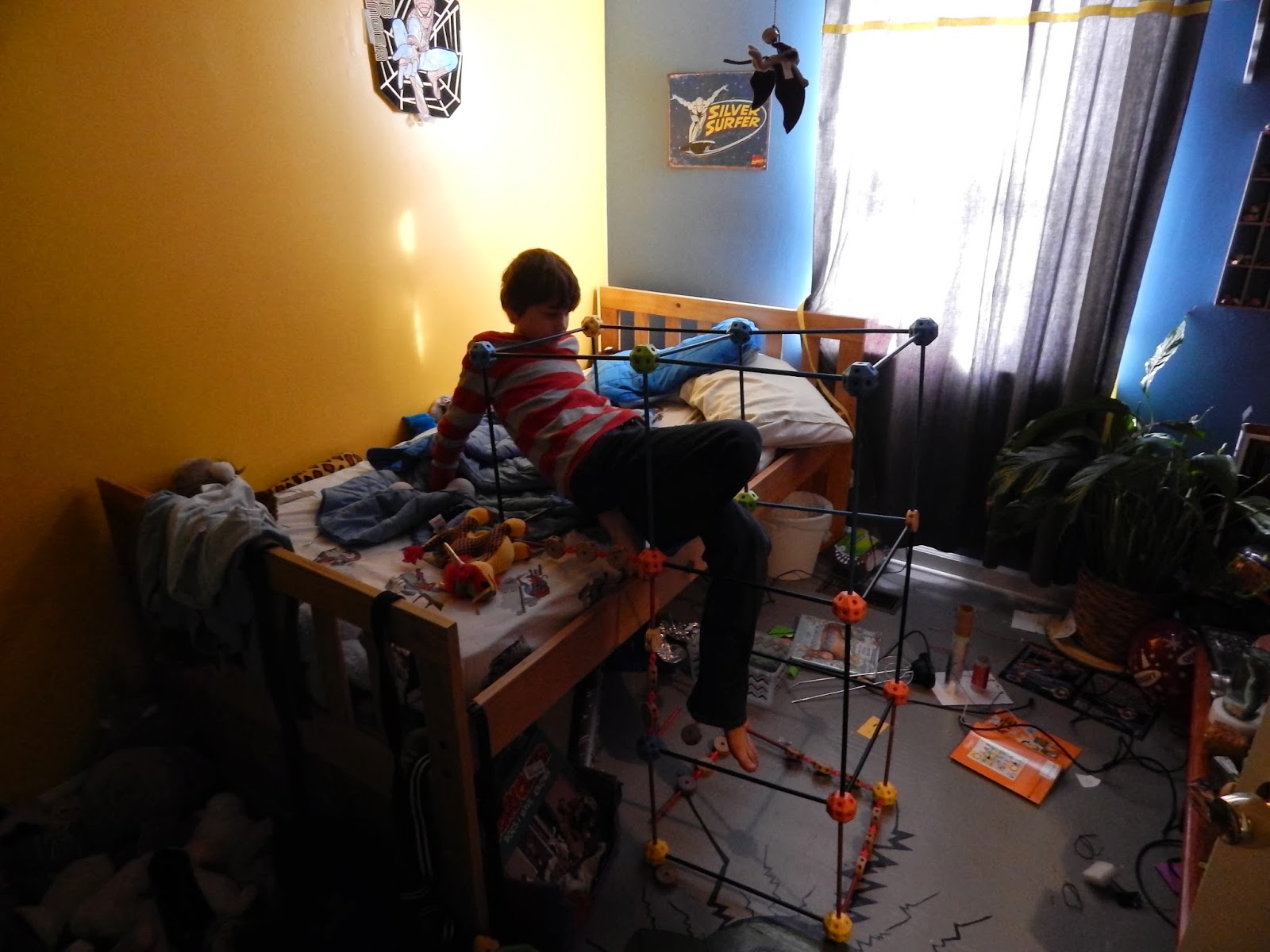 Stephen built the whole day organizing and building with his arduino... 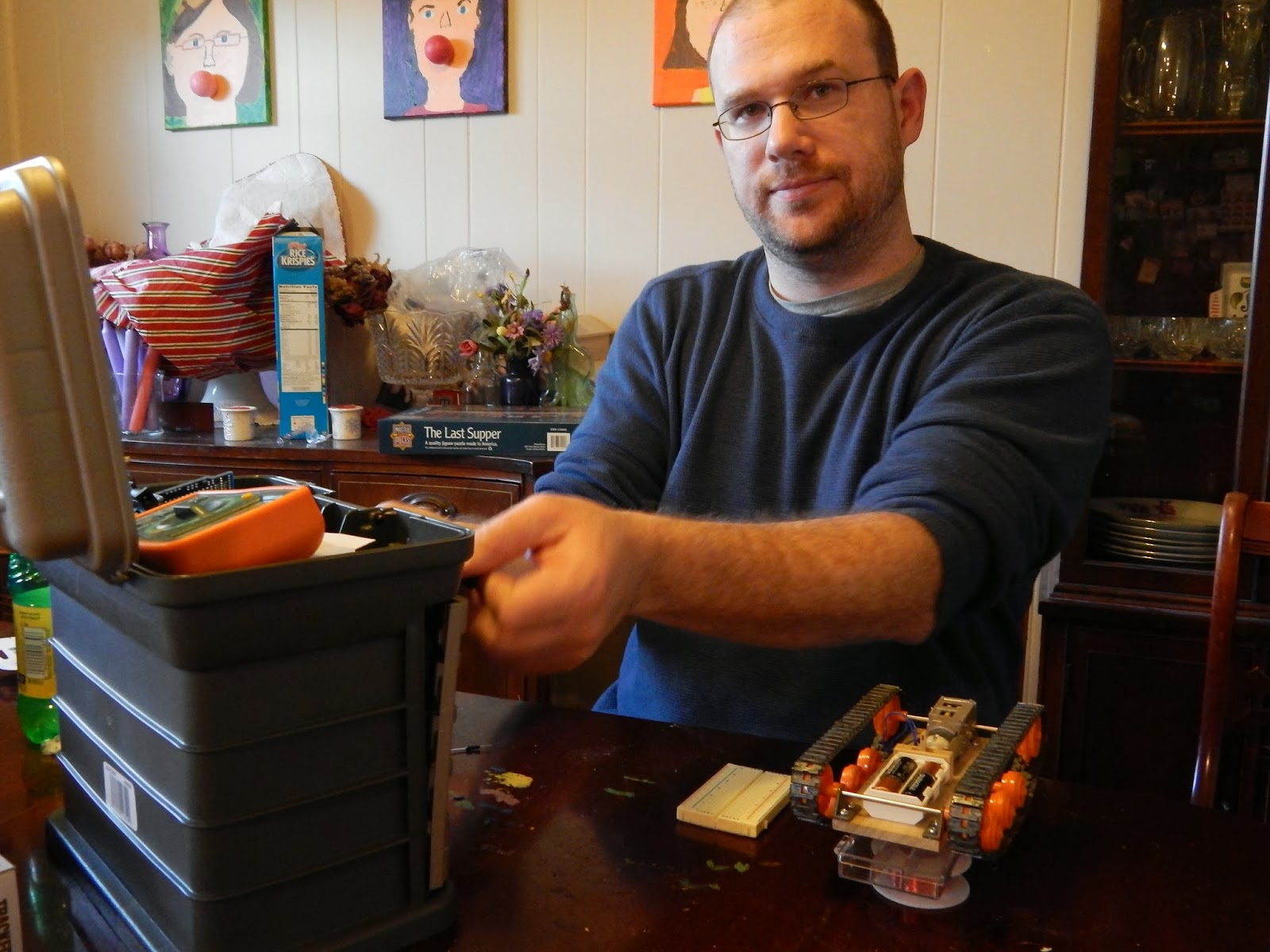 And here's video of dominoes falling down....