I am about to expose one of the areas where we have really dropped the ball as parents!!

My Dad taught me to ride a bike VERY early.  It's one of the few EARLY memories I still have.  Then he made me make the jump to a 10-speed early, and I'm glad he did.  I've always been quite good at riding a bike, and have always enjoyed it.

Stephen taught himself in his front yard with a bike that he and his brother shared...also at a young age.

This REALLY bothers me.  I've mentioned it several times to Stephen.  The problem is, we've never lived on a flat street that wasn't a busy street.  And hauling bikes somewhere flat is fine every once and a while, but  not very practical to do often enough to learn.  The kids have been SO incredibly wobbly that I have trouble holding them upright while they try to get started, so I've been bugging Stephen to teach them.

So while he and I have been painting the living room, we sent them out to play in the front yard every once and a while, but Stephen gave them a new requirement.  They each had to take the bike that he removed the pedals from and glide down our driveway, to learn to balance better.  They had to each do it 30 times, each time they went out.

I just have to include how much Clyde encouraged the girls in this endeavor.  They DID NOT enjoy this.  Here he is being Iris's cheer-leader.  She was really dragging and miserable, and he started yelling, "Here comes Iris, trying for gold in the Olympic gliding bicycle event, watch her go!!  Wow!  Look at that, in first place again and with an all time world record!!  Give me an 'I'...'I'! Give me a 'R'...'R'! Give me an 'I'..'I'!  Give me a 'S'....'S'!  And what does that SPELL?!........IRIS!!!"  Having him cheer her on really perked her up, and she started enjoying herself :) 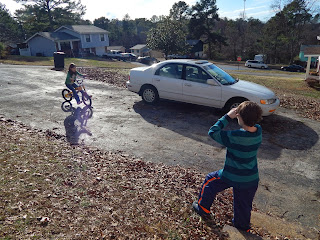 However, we are NOT allowed to cheer on Clyde.  It's makes him embarrassed.

After the second or third time they did this, they had improved significantly.  Iris finished first, so Stephen carried Lu's old bike down to our neighborhood's flattest street to let her try REALLY riding WITH pedals, but WITHOUT training wheels.

And she did it! 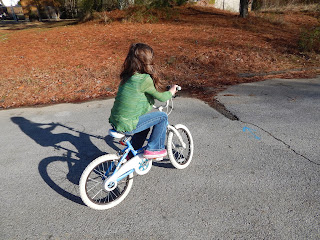 And she was SHOCKED!! 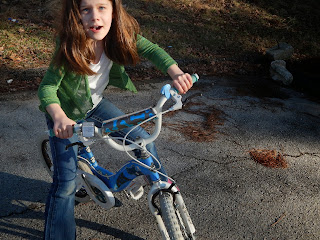 Then she was just determined to do it for a longer amount of time. :) 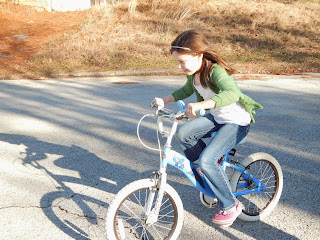 Clyde came down and he did it too!  He was a little embarrassed to be riding a girly bike, so after a while a neighbor boy let him try his...very sweet :) 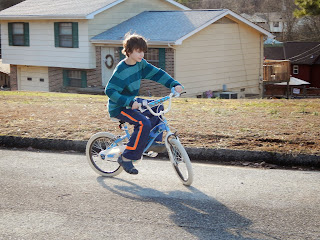 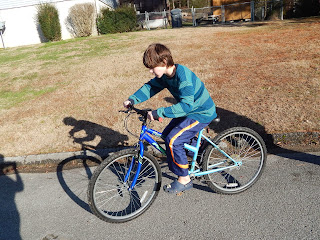 AND then Lucy came down and tried it and she did it too!!  So all 3 kids learned to ride without training wheels the same day! 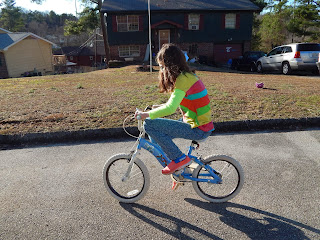 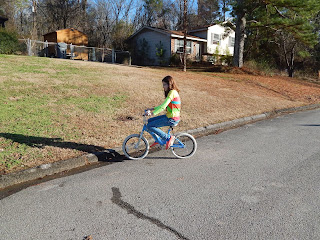 It was awesome!  They still have a lot of work to do, they're wobbly, nervous, and have trouble starting, but I'm just so glad to be at this point and very VERY proud of them and their efforts!!
Posted by mirandagail at 9:03 AM